I woke up to the phone screaming off the holder at 7:30 in the morning. Haphazardly rummaging through the suitcase (which I packed by myself for the first time), I tried to decide on the set of clothes I’d wear for the day. I reloaded the weather app three separate times and got three separate forecasts. I looked out the window to a piercing blue sky with cotton candy clouds and trees so green they almost looked fake. I could hear the city waking around me with distant sound of rush hour traffic. The faint sound of the ocean protruded through the rows of buildings. This is it. This is heaven, I thought.

I stumbled down the stairs to go to the hotel cafe for breakfast. I saw a wide assortment of breads, fruits, cakes, and juices. The milk and yogurt was all locally produced. The fresh pineapple was picked just a few miles away and dissolved on my tongue, sweeter than any fruit I’d ever had the pleasure of tasting. The cakes were just dry enough to pair perfectly with a morning cappuccino (which I’d grown accustomed to having in place of Dunkin’). I used my post-breakfast energy to run back up to my room to prepare myself for the rest of the day.

I met the group in the lobby at 8:50 where we waited to embark on today’s adventure. We already felt like we’d seen most of the 10 mile wide island. What more is there to see? Today, we went to Furnas, a small village in the middle of the island with a lake that is currently in the final stages of depollution.

I boarded the bus and we began the slow trek up windy mountain roads. I suddenly realized  that I was two thousand feet above sea level and overlooking a cliff from my seat. Less than three feet away from the bus tires was a sharp, grassy cliff. I decided that it was in my best interest to look the other way.

The bus stopped at a viewpoint on the side of the road. As we disembarked, I noticed the incredible scenery in front of me. This is nothing like I had ever seen or likely will ever see again. 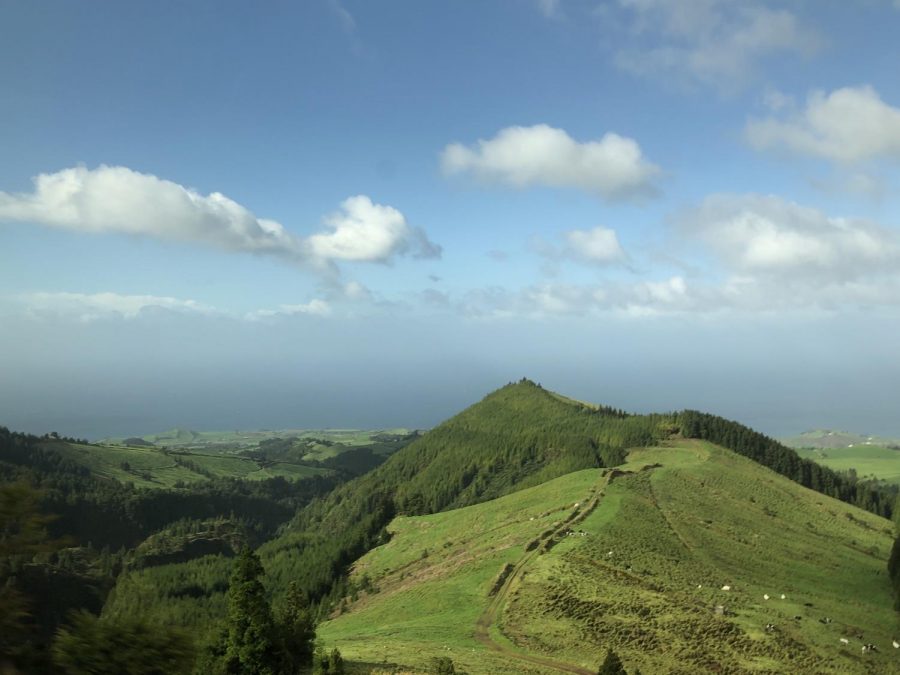 I was on a balcony built on the side of the mountain. From there, I saw the grassy hills falling below. Beyond that, was pastures of happy little cows grazing in their fields, eating that almost-fake, green grass (São Miguel is a very bovine-friendly place, cows were everywhere). Further, I saw the city we just drove out of 15 minutes ago. The buildings were smaller, not nearly as busy-looking. It looked peaceful: asleep. The tiny, terracotta roofs were squished together and ant-sized cars scuttled down the harbor-side road.

Past the city, was the ocean—beautiful, pristine, and an indescribable shade of blue. Tiny waves crashed on the volcanic shore. Just looking at the water made me feel cold; it was the color of a glacier. And if I focused far enough, I could actually see the curvature of the Earth. That sight made Earth feel so small, and the island almost insignificant. It made me feel like I was on top of the world; like I could achieve anything.

I closed my eyes, and took a breath, opening them one more time, just to drink up the panoramic again. Yup, it was just as beautiful as the first time. I was not dreaming.

I boarded the bus and a few minutes later, found that we were at the bank of a beautiful green lake. The lake was formed due to Strombolian eruptions where the top of the volcano flew off and the eruption struck a fresh water aquifer—in the middle of the Atlantic Ocean.

When we entered the geothermal observatory, the geologist explained the work they had recently been doing on the lake. The Lagoa de Furnas (Lake of Furnas) was polluted due to the dairy farming industry. In order to clean up the lake after years of pollution, scientists from all over the world started coming up with different solutions. They kicked all of the farmers out of the runoff land, then proceeded to take the waste out of the lake. They used a runoff filtration system to clean off any water that was entering the lake from the land where the farmers had been. They also planted a type of clover indigenous to the Azores that takes in a high level of nitrogen, releasing it back into the atmosphere. This also creates a non-chemical fertilizer, which is used by other farmers on the islands, and decreases the risk of invasive species. The lake was clean in just 11 years; people and cows are still not allowed in or near it.

We took a nature walk around the preservation. Because of all the scientists that came to the Azores to help, as well as Portugal’s trading economy, many people brought different types of plants to the small, semi-tropical islands. The healthy, moderate weather of the Azores allows all sorts of species can grow and thrive on the island.

We saw of different types of plants. There are the skinny, straw-like Indian bamboo. The yards and yards of Camellia bushes, indigenous to the Azores. There were trees that could’ve been mistaken for small bushes and others that could pass for Redwoods. Volcanic rocks were scattered along the muddy path. Mysterious paths branching off from the main one, tantalizing adventure with the darkness of the trees. Even the moss that grew on the rocks and trees was beautiful. Sunlight cascaded through the branches of the trees to create a picturesque view of the Azorean wilderness. They certainly don’t call São Miguel “The Green Island” for nothing.

I emerged from the wooded pathway after stepping stoned to cross creeks and climbing over fallen trees. We emerged at a part of the island known for their hot springs. The water bubbles could be heard bubbling from many feet away. The distinct, egg-like smell of sulfur could be smelled from even farther. The hot springs are pools of water, turned grey from all the sulfur and minerals, heated to past boiling point by the lava beneath Earth’s surface.

When I looked around the hot springs, I noticed strange piles of dirt in certain areas. When I saw two men (appearing to be Azorean natives) hop out of a van with different types of hardware, I watched to see what they would do.

They used a hoe to clear away the dirt mound, revealing a wooden cover to a three foot deep hole. They used a pole with a hook on the end to take out the hidden treasure—a pot?

It was revealed during lunchtime that the people of the village  use the hot springs as a way to slow cook their cozido, a traditional of stew native to Portugal.

Myself and the rest of the group headed to a restaurant where we were able to try the famous cozido. It was heavenly. The meat, potatoes, and vegetables just fell apart in my mouth. There is a mixture of different types of pork, chicken, beef, cabbage, potatoes, and so much more that I can’t even remember.  Before I knew it, I had a food baby.

We boarded the bus again and headed to Parque Terra Nostra, a botanical garden (fun fact: previously owned by a Bostonian, Thomas Hickling). The cobblestones beneath my feet felt almost as therapeutic as the smell of the trees and flowers. The trees lit up green in the sun. The palm trees made me feel like I was in Hawaii, but the Azorean Pine next to it reminded me that I was in a place like no other. It felt almost fake, but I pinched myself back to reality with the thought that this is a place beyond even my wildest imagination. The flowers came from all over the world along with the trees. Our tour guide let us eat a flower because it is supposed to taste like garlic. It did (thanks, Lucy, for that endeavor).

We walked around the thousands of plant species for about a half an hour, passing old mansions and houses, old enough to be covered in ivy, yet still immaculate. We found our way through a path and discovered a thermal pool. The water was turned orange because of all of the iron, minerals, and microbes from the source. It was so natural that there was moss growing along the cobblestones that lined the pool. Everyone in the group, including Senhora Pontes, climbed in. The water was as warm as a hot tub and it was just deep enough for everyone to be in up to their shoulders. Despite that it was already hot out, the water still felt fantastic: like a giant, mineral hug.

We boarded the bus to head back to the hotel where we were given a few hours to chill and shower. I took the opportunity to check out the hotel pool, sauna, jacuzzi, and Turkish bath. I showered and prepared for another evening out on the city.

I met the group for dinner at 7:15 in the lobby. We went to the restaurant next door to the hotel with a buffet of authentic Portuguese dishes including Portuguese Pork, Cod with potatoes and a creamy sauce, and homemade vegetable soup. There was a small dessert bar consisting of an assortment of cakes and fruit. The fruit was so juicy. It tasted like it was just picked that day (which it likely was. Small island…).

After dinner we all headed out for the evening. Tonight we decided to go to the nice crepe place after a walk on the boardwalk.

The walk along the harbor was magnificent. I grew fonder and fonder of the cobblestone every time I walked on it. As the sun set over the city, the walk slowly grew darker. Then, all of a sudden, as the sun dipped just below the clouds, it was like someone turned on all the light in the world. The clouds turned bright pink, with streaks of purple velvet, and the sky was a mix of periwinkle and lavender. The sun was golden and peeked out from behind the church steeple. Everything seemed right in the world. And as much as I tried to take pictures in a desperate attempt to snapshot the moment, it was gone as quickly as it came.

I continued walking to Nut. I got in line at the cute little cafe. It smelled like cake, waffles, and Nutella—delicious. I ordered a crepe with Nutella, strawberries, and bananas to share. As I devoured the crepe, I noticed my friend doodling on a napkin next to me. The napkin remains on the wall of the cute little cafe to this day.

As I enjoyed another short walk through the city under the stars, I realized that I did not think of home once that day. I had no time for the thought of returning home to even cross my mind. I thought about everything I did that day and yesterday and what I’d do tomorrow. I realized that my days in paradise were fleeting quicker than I’d like. I went to bed that night dreaming of staying on the little island for the rest of my life.