One More To Be Spirit Week Champions 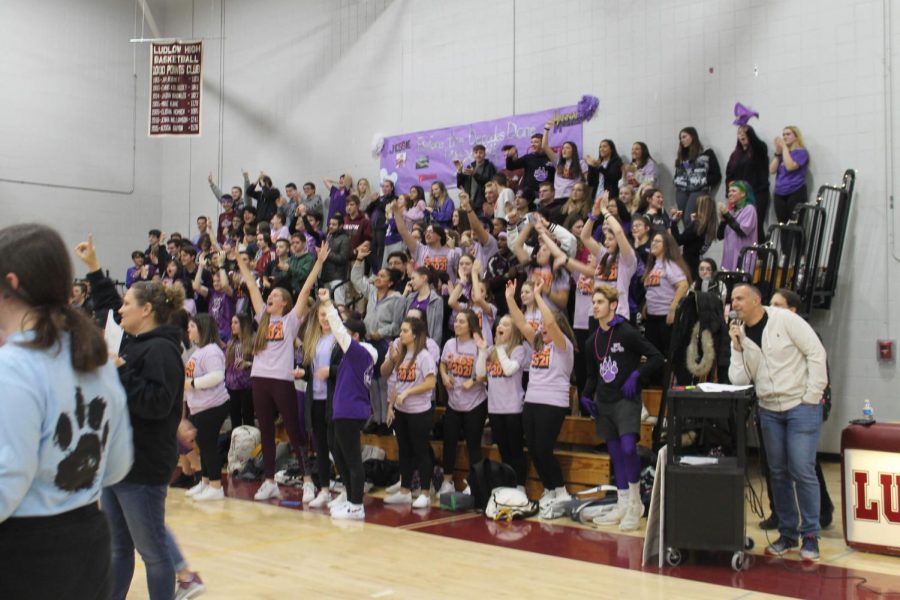 Ludlow High School’s annual winter spirit week is the best way to send off students right before the winter break. With the intentions of bringing the classes together to compete against all other grades, the week consisted of five theme days and ended with the annual pep rally.

Day two of spirit week played to students nostalgia: Disney Day. Students wore Disney or Disney character related clothes. This was the day that the least number of people were dressed. The winners of Disney Day were the Seniors with a total of 35.7% (Juniors with 27.2%, Sophomores with 17.3%, and Freshmen with 10.7%).

Day three was Ugly Sweater day in the spirit of the holidays. Students dressed up in their ugliest holiday sweaters and jingled their way down the hall to be counted. Seniors also won Ugly Sweater Day, beating the Juniors by 11%. The Sophomores beat the Freshmen by only 2% with a total of 19%.

The pep rally began with a win for the seniors in the penny wars and a win for the juniors with their banner. The first event to occur was the marshmallow drop with the Sophomore class winning with Krystian Wojcik and Ryan Colson representing them.

After that was the Ludlow High School Fight Song. The junior class won with a united sing-along.

The T-Shirt Conveyor was the next activity on the agenda in which students had to link arms and take the t-shirt off of one person, putting it on another, without letting go of their arms. The senior class won this challenge represented by Kassy Muise, Chantz McClean, Sedona Wikar, Emilio Mancuso, Maegan Santos, Adam Wehner, Jimmy Elliot, Nate Homans, Baylee Edwards, and Jocelyn Trajkovski.

The lip sync battle was the event with the most anticipation during this spirit week. The seniors won with a blast from the past creating a mix off all the best songs from the past decade to celebrate the start of another. A video of the winning performance is posted below:

In the end, the Juniors ended up winning spirit week with the Seniors at a close second. Juniors ended the week with a total of 44 points, the Seniors trailing just 2 points behind. The Sophomores ended the week with 39 points and the Freshmen had 24. With this, students left for their break feeling festive and closer to their class as a whole. Junior Marissa Balbino said that overall, she was “pleased with the results and satisfied with another win for the juniors.” If Juniors continue this streak, they will be names this year’s spirit week champions.