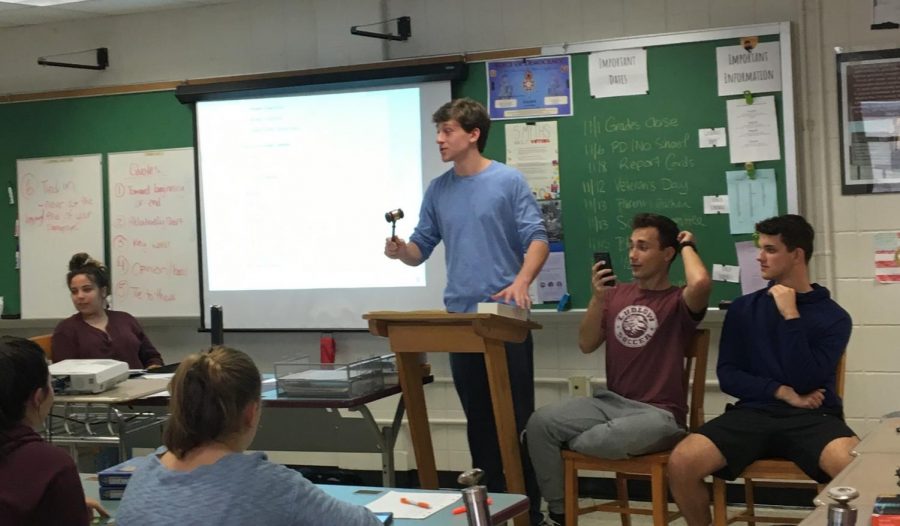 Last Thursday, student council turned down a motion to elect class officers for two-year terms. The proposal was brought up by Principal Lisa Nemeth.

“Last year we had a couple of upsets, and some of the advisors said, ‘We’ve made these great relationships with these kids and all of a sudden, boom! They’re gone, and we have to start all over again… ’ Sometimes the student works really really hard and they get voted off [student council], so it’s just not fair sometimes,” Mrs. Nemeth explained.

With lots of discussion before the student council voted, many points were brought up about how the plan would work. Would there be a way to impeach an officer? Would you only vote once or three times? When would this go into effect?

Before he retired, Mr. Bylicki, 32-year student council advisor, explained the process for how to get rid of a class officer. To impeach a class officer, the elected class officials (4 officers and 5 reps) must vote with two-thirds majority. There is then a hearing and another vote.

The plan would have allowed students to vote for their freshman class officers and junior class officers. Those officers would continue in their positions for two years, until the next election.

The proposal was not popular among the student body, with nearly all interviews giving a negative review.

“I understand the idea behind it but I feel like there’s a lot of problems when using it in a school setting,” said Arda Ibas, president of the senior class, “I just feel like two years is too long for a high school setting because a lot can change in one year.”

Junior class representative Miranda Balbino also voted against the proposal. “I think it’s an interesting idea but it would be a hard concept to execute… I feel like people change constantly and especially in high school, so people’s’ priorities change, their ideas, so even if someone doesn’t have the time for student council anymore or doesn’t believe in what they’re doing anymore, I feel like it’s kind of hard.”

Senior Mary Jordan described how this policy would affect possible candidates: “It takes away from people’s ability to be class president if they want to be it or run for a certain [position] if they want to. Or if something happens one year and people want a change then they have to wait two years for a change.”

The motion was not liked by student council either, with both the Juniors and the Freshmen voting against it. These two classes would’ve been the turning point considering it would’ve helped their officers the most. Student council denied the policy unanimously.

According to class officers, this was a historical moment for student council — the only proposal unanimously denied that anyone can remember. Here’s a photo of student council president Max Morel taking the vote and denying the proposal with the clap of his gavel: