The Making of Matt Goncalves 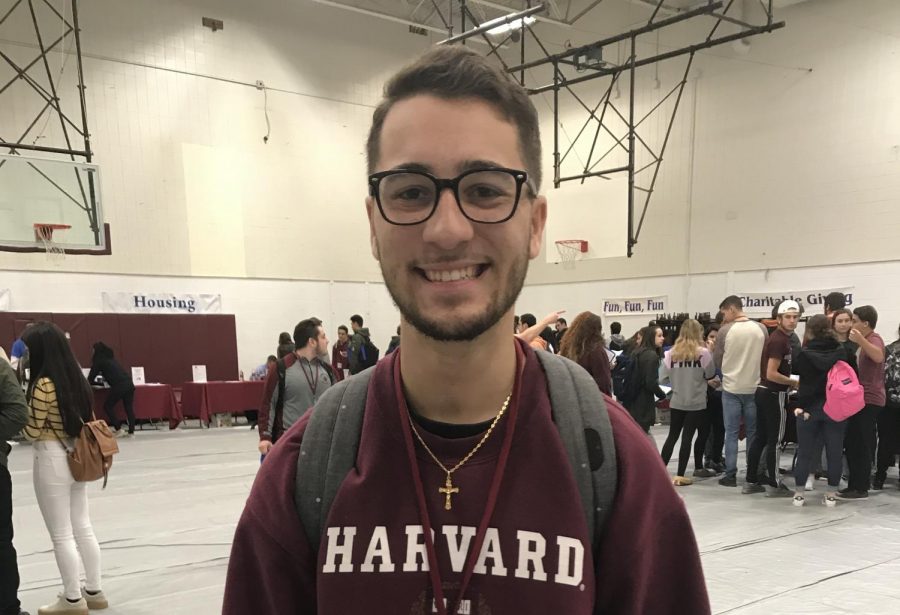 Senior Matthew Goncalves ran for class president on a whim.

“I was taking MCAS and I finished relatively quick and I forgot my book and had no homework. So I thought long and hard during the last 40 minutes of the session if I should run for class president. I never regretted my decision since,” says Goncalves.

`Matt seemed to have changed the 2018 class the past two years for the better. The class of 2018 voted for Goncalves during the end of sophomore year making him the president junior year. Matt proved himself enough junior year to get him voted in again for their most important year, senior year.

Matt, the high energy senior with an ever-present smile, brings joy and laughter to his friends and the entire school. He becomes friends with anyone and everyone, saying “hi” to classmates who pass by while serving as “senior patrol” at the bottom of the LHS center staircase.

Goncalves opens himself up to listen to problems people have and doesn’t ignore them and provides laughter and wisdom everywhere he goes.

Goncalves says the best decision he ever made would be running for class president. He loves going to the meetings, discussing class issues, and meeting new people.

Katie Picard, a senior at LHS, thinks Matt has made a great impact in our class: “He helped our class come together, improved our class spirit with new class shirts, and got us pumped up for spirit week.”

Picard believes Matt has found a way to bring the class together by letting the seniors vote for what they want and listening to their concerns about upcoming events. “We have to be with each other five out of the seven days in a week, I think our class should be close. We spent most of our lives together and Matt helped us all see the impact we can all make together,” say Picard.

The class of 2018 had high hopes for Matt as he went into his “presidency.” They knew he would meet what they wanted and more because of Goncalves’ high spirit and attitude towards the class. To this day Goncalves still exceeds what the seniors want. The class has since had more spirit and contributed to many more of the events, pulling out victories and still having high hopes in getting more.

“I don’t think that I would expect more from Matt, we’re all having fun together during spirit weeks and we show we want to be there just from the atmosphere around us,” says Picard.

As president, Goncalves believes it’s important for his classmates to have a say in what they do.

“The best part about being president of the senior class is giving people the opportunity to vote for their field trips, and helping with senior show” says Goncalves. He says he loves seeing the seniors give input on where they want to go and what they want to do. With their opinions it makes it enjoyable for everyone.

On Twitter the seniors are given polls asking where they would like to go for field trips, class shirt ideas, and more options Matt thought the seniors would benefit more from if they were voted on. With this option, last year’s and this year’s class shirts have came out as a complete hit.

Goncalves has high expectations for the class as they complete their last year with two more spirit weeks. After the seniors lost the first spirit week Matt expects them to win the last two spirit weeks and by doing so changing the lion color to the senior class color, blue. He also expects everyone to vote on twitter for the next field trips and kill it on the dance floor at prom.

Joe Banas, a well known senior, believes Matt couldn’t be better at his job. “Matt has always had a positive impact on the class since the first day he got elected. You could tell the class was very excited,” says Banas. He explains how he sees more students getting involved and having fun with what they do.

Banas, like other students, loves the idea of twitter polls. “It really gives a voice to the students who may choose to not speak their minds publicly.” Joe says Matt’s new ideas have brought the class together like a family.

“It’s pretty sad that this is my last year, I wish I had done it earlier. Time went by so fast and I had so much fun doing it. I wish I could be president at one of the colleges I apply for,” says Matt.

Goncalves exclaims, the most memorable experience by far would be winning the winter spirit week last year. “It really showed that our class wasn’t settling for last place anymore. The amount of smiles on people’s faces and the excitement across the whole class was amazing.”

Matt proves his love for the class by thanking them on Twitter and encouraging them to do bigger and better things for themselves and the school.

Senior Kat Mowry agrees with Picard and Banas saying Goncalves has made the class better. “I like participating in spirit weeks more because it’s a better energy when Matt started.” Mowry says the amount of laughter we have during our spirit weeks is amazing. “Teachers can probably tell our class is having more fun when we do things.” She also explains these last two field trips have been more exciting since they got to vote on them.

Mowry explains if it wasn’t for Matt becoming president, she doesn’t know if the excitement would be shown within the class.

After high school, Matt wants to attend a four-year university, and study criminal justice, and he hopes in the near future to become a local police officer.

It’s a good thing for the Class of 2018 that MCAS ended a little early for Goncalves. And who knows, maybe he’ll think “long and hard” for a few minutes on another important test and run for another office with a whim decision.