O’Connor shares his story through history 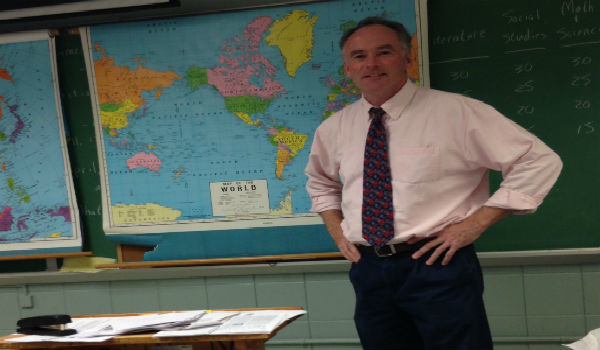 A year learning from John O’Connor, U.S history and government teacher, will be unlike any other history class at LHS. From his above-average energy levels to his singing and daily news clips, O’Connor is truly one of a kind.

Although O’Connor is on his 28 year of teaching history, he didn’t always want to teach.

“I went to Westfield State College and Western New England College,” says O’Connor “But I actually majored in accounting first. I got this great job at MassMutual but after three years I quit because I was uncomfortable doing auditing work, I moved back in with my family until I finally went back to school to be a history teacher.”

“Even though it was not a paid position back then, when you’re a new teacher and the principal asks you to advise something like that, you do it,” he said. “I really do enjoy advising As Schools Match Wits, and I always tell kids when they try out to join the team; what are the chances anyone in this school will be able to be on a gameshow? It’s a once in a lifetime opportunity.”

In the classroom O’Connor is just as enthusiastic. He uses poems, music, and other forms of expression to help students better understand the history.

“Music is something everyone likes and identifies with, not everyone is going to like history, but everyone likes music,” he said. “If I play maybe six or seven songs throughout the year it’s my hope that at least one song will resonate. Music is what hits home.”

O’Connor plays songs like “Hotel California” by The Eagles and “We Didn’t Start the Fire” by Billy Joel. “We Didn’t Start the Fire” can only be described as a shopping list of historical events in both political and pop culture. The song helps students relate to history with things they both understand, and don’t understand, giving students the opportunity to ask questions about history from something they can relate to. He even has a gigantic John Lennon poster hanging up in the corner of his room. He uses these songs to relate back to the units he’s teaching and help his students form a connection between music and history.

As O’Connor’s third decade at LHS quickly approaches, he is asked to share his fondest memory of LHS. He looks off in the corner of his room. He ponders. After a lengthy silence he mentions graduation.

“Every year I make a point to go to graduation, because when I see my students walk across the stage it reminds me of why I do what I do.”

“Every year kids comes back to visit — not a lot but a few — and it’s nice to see what they’re doing. It’s especially nice to see some of your students become teachers, and being their inspiration. I think all students should come back and visit their teachers.”

When asked what advice O’Connor would give to students he laughs and puts his head down. After thinking it over deeply he slowly begins, “Give some good thought now into what career you want to end up in.” After a moment he adds “It sounds obvious but I took the long road, I majored in accounting and in the end it just wasn’t me.”

When O’Connor eventually retires, he has big plans for what he wants to spend the next chapter of his life doing: “travel.”

“I’ve been to Ireland six times, England, and Scotland, and they were great trips, but since I got married and had kids I haven’t had those same options for the last twenty years,” he said.

Specifically he wants to explore the American West, renting an RV and traveling across the country; past Houston, Texas and Chicago, Illinois.