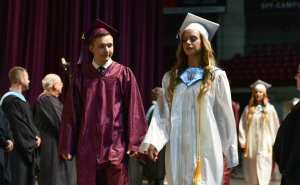 Traditionally at Ludlow High School graduating senior girls wore white gowns while boys wore maroon during the graduation ceremony at Mullins Center in Amherst. However, the Class of 2016 will be the first to wear the same colored gown — maroon with a white stripe — in an effort to stop discriminating among transgender students.

Principal Lisa Nemeth made this announcement during the back-to-school assembly on Aug. 26.

“It’s for people who don’t fit into the male and female gender; it’s to protect them and make them feel fit in, and they’re not forced to come out to everyone if they’re not comfortable. It’s to make them feel included,” said senior Danielle Quenneville.

The gowns weren’t changed to make everyone the same, they were changed to make transgender students feel like they belong with everyone else graduating, without being confused or unsatisfied with the gender of gown they were assigned.

Although not all students support this decision. The main focus on students dislike isn’t on the idea of transphobia but rather the design on the gown. “I am neither for it or against it.” says senior Electra Banas, “I just think students should not be forced to wear it.”

In spite of the fact that many students support the new gowns, an overwhelming amount don’t agree with the new law. Senior Ashley White along with a few of her fellow classmates has taken it upon herself to petition the new gowns. Her petition has over 100 signatures and she will be presenting the petition to the school board September 9.