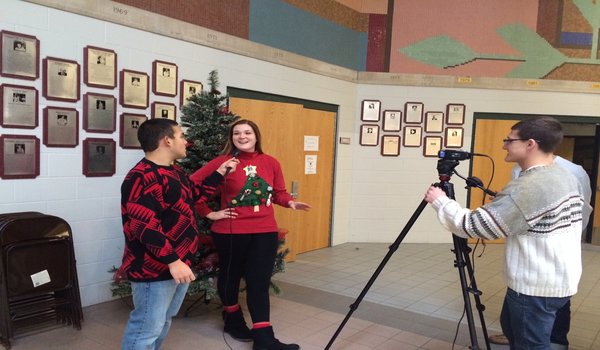 This year, the school TV show, The Lion’s Roar, has added a few new twists to the set. The biggest change includes going from a “faculty only” based show to a student-run based show. Michael Hill, who has been working here for five years as a manager running Ludlow Community Television, has replaced teacher James O’Hearn.

Hill asked the students and staff how they could improve the show, and after reading all the emails and suggestions, he put a plan together.

The studio has also changed. In the past, the show was taped in a small room in the corner of the school (B204), using two cameras. This year, the TV show is taped in an actual studio, with professional equipment, lights, and other state-of-the-art technology to make the show better than ever.

“We like the idea of doing a weekly show, but wanted to implement some changes. We took suggestions from students, teachers, everyone. We made it shorter, used students as hosts, and lots of other ideas that people wanted to see,” said Hill.

A new host and live reporter of the show, senior Nate Ferreira, was thrilled by being one of the first students to host the TV show ever. Ferreira co-hosts the show with senior Tiffany Vestal. Senior Nick Nogueira joins the crew as Ludlow High’s local weatherman.

The show has also started wishing people happy birthdays, forcasting the weather, and showing the scores for the local sports teams.

Hill loves the crew of this year’s show, but is always excited to see new faces.

“A lot of people don’t know we are here, and I encourage anyone interested in TV or production to stop inside,” he said.

The show has received positive reviews throughout the school, students and teachers finding it much better than the old version. Most teachers appreciate how quick it is, no longer having to wait twenty minutes to start class.

Junior Shayla Costa likes the show because it gives off a more professional feeling to it. Finding it to be more enjoyable, she also thinks it is much better than in previous years.

“I like [the show],” said senior Tiana Meak, “the set up reminds me of a talk show or actual news.”

But other people believe that while it’s a step in the right direction, there is still room for improvement. Mary Beth Will, a teacher in the history department, thinks there can be adjustments made to hosting.

“I think they should give more students the chance to host, maybe have two different hosts each week. It would give students good experience speaking in front of large crowds.”

But overall, most people find the show to be better than ever before, and are always excited to see the new episode every Friday.