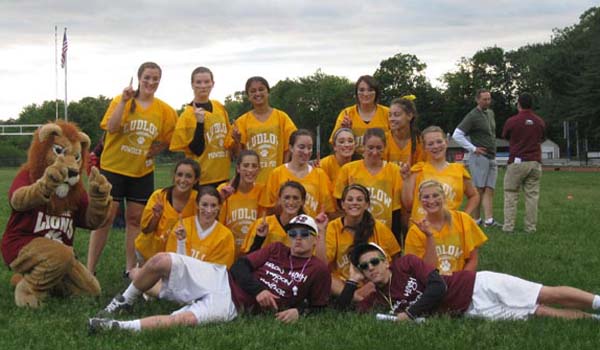 The sophomore Powderpuff team celebrates after a 2-0 victory over the freshmen.

The junior and sophomore classes both posted shut-outs in their Powderpuff football games against the seniors and freshmen, respectively. The natures of the games, however, were entirely different.

The Class of 2013, coached by sophomores Jeremy Lamontagne and Mike Lavell, pulled off a less-than-last-minute victory in a defensive war against the Class of 2014.

The sophomores started with the ball on their own 20, but went four-and-out following a sack by 2014’s Meghan Flowers. The freshmen were unable to capitalize on a first-and-goal situation, however, as poor snaps resulted in a turnover on downs.

Sophomore Melissa Wojcicki seemingly brought a spark to her team with a 15-yard run, but that spark was quickly put out by an Aly Bruneault interception.

With the freshmen again in great scoring position, a potential touchdown pass was batted away on third down, followed by a turnover on downs.

After a scoreless first quarter, the sophomores had still not gotten the ball out of their own territory, until the running back duo of Jocelyn Forcier and Jess Pashko took the ball to the freshman 15-yard line.

Colleen Dusel threw a perfectly-placed pass that likely would have been taken to the end zone had Pashko not slipped. A fourth down pass was broken up by Bruneault, stopping the sophomores’ momentum, and giving the ball back to the Class of 2014 late in the first half.

Coach Dan Kinne began dialing up quarterback sneaks by Paula Yelinek, but time worked against the freshmen, and the clock ran out on a scoreless first half.

Lamontagne and Lavell agreed that the freshmen, “[didn’t] know what’s coming,” heading into the second half of play. It is unlikely, however, that even they could predict how the game would play out.

Kinne, who planned to “keep [the sophomores] on the inside of the field,” and take his own offensive plays to the outside, acted early on that strategy with a Maddy Foye run. Foye would then complete the game’s first pass, hitting Bruneault on a 20-yard streak.

Forcier put an end to the fast-moving drive with an interception on her team’s 35-yard line. After Pashko was stopped on a run that otherwise would have gone to the end zone, the sophomore class was unable to do anything with the drive, turning the ball over on downs to end another scoreless quarter.

Kinne returned to the sneak game with Yelinek at quarterback, and likely regretted abandoning it when a Yelinek pass was dropped by Bruneault, followed by Forcier picking off the ball for the second time in the game.

Pashko appeared to take the ball inside the freshman five-yard line, but School Committee member and referee James “Chip” Harrington ruled that she had stepped out of bounds 40 yards back.

The ball would be given back to Pashko, who took it 20 more yards on the next play. A number of runs later, Forcier would wind up just outside of the goal line. The running game was then stopped, and the passing game was unsuccessful as a pass in the end zone fell through Morgan Doherty’s hands.

With less than a minute on the clock, the freshmen were forced to travel down the entire field, starting essentially at their own end zone. On the first play of the drive, however, a pile-up resulted in one of Yelinek’s flags being held in the air as she was sacked for a very close safety.

Down by two, Kinne and the Class of 2014 were put in a must-score situation beginning at their own 20. With the passing game having been met with little success, Kinne would once again turn to Yelinek to run the ball.

Both time and the sophomore defense worked against the freshmen, however, and after time had expired, the sophomores walked away with a 2-0 victory, described by Lamontagne and Lavell as, “the greatest day of our lives.”

For the Class of 2012, though, the night was not about a trophy. It was about beating the seniors and maintaining their undefeated Powderpuff record.

The junior team was coached for the third consecutive year by teachers Michelle Fontana and Keith Woodman.

“We came to play, and we play to win,” said Fontana as her team took the field for introductions.

In terms of coaching staffs, it was a literal battle of teacher vs. students, as the senior team was coached by seniors Nathan Gregoire, Zach “Ziggy” Ventura, and Billy Kimball, all students of Fontana.

The teams took the field at the seniors’ 20-yard line, and after a failed first passing attempt, Brittany Nogueira found Patty Taylor on two consecutive passes.

Yelinek nearly found open field on the return, but was stopped by Alegra Goncalves as she crossed mid-field.

Though senior Jess McVeigh posted over half of her team’s tackles, becoming the night’s only player to reach double-digits in that category in the process, her defensive play was not enough to stop the Class of 2012. The juniors began rotating Yelinek and Steph Ferreira at quarterback, mixing sneaks and passes in an effort to confuse the seniors.

Yelinek eventually found an opening and ran a boot to score the night’s first touchdown, but came up a yard shy on the two-point conversion.

On their second possession, the seniors began rolling, picking up yards on short runs and passes, but were forced once more into a punting situation.

Mackenzie Foye would end up scooping up the ball after the punt, and after some confusion, returned the punt 40 yards to the seniors’ 20-yard line.

On the first play of the drive, Yelinek would receive a screen pass from Ferreira, managing an incredible spin on the sideline and taking the ball to the end zone for her second touchdown of the night. The two-point conversion, however, would again be unsuccessful.

With the first half nearing its end, Nogueira threw up a desperation pass which was nearly intercepted by Majka, but knocked out of her hands as the first half expired.

Up 12-0 with 20 minutes of play remaining, the juniors were all smiles.

“I’m very, very impressed by these girls. I’ve never seen a confidence like this on the field,” Woodman said.

The confidence was apparent in players such as Yelinek, who said only, “We are unstoppable, and we’ll forever be unstoppable.”

After learning that the senior coaches declined to comment on their disappointing first half, Fontana continued to gloat.

“It’s because they got nothin’,” she was overheard saying to her team.

When the game resumed, Yelinek looked as though the 10 on her green jersey should have been replaced by a 7, as she channeled her inner Michael Vick.

Elusively running the ball, completing passes, and commanding her offense, Yelinek hit Allie Goncalves on a 35-yard screen, and two plays later, had her second rushing touchdown of the game.

After Grenier was pushed out of bounds a yard short on the two-point conversion, the seniors were met with an 18-point uphill battle.

The Class of 2011 again utilized the short run game, including a Nogueira sneak that could well have gone to the end zone had she not been pushed out of bounds. The ball would go back to the juniors, however, following an incomplete pass from Taylor to McVeigh on fourth down.

For the first time in the game, a 2012 drive did not end in points. After some confusion and dispute, Harrington would ultimately rule Grenier down about half a yard short of the first down, giving the ball back to the seniors.

Laura Fanning would then step up for the juniors, making impressive, diving tackles to stop runs short. With two minutes remaining, a Nogueira pass would fall incomplete, giving the ball back to the juniors.

Per the rules of Powderpuff football, the clock stopped after every play, forcing the juniors to keep making plays. With 23 seconds remaining in the game, Foye would rush for the juniors’ fourth touchdown of the game, bringing the score to 24-0.

Knowing that they had the game won, talks of t-shirts eminated from the juniors’ sideline.

“They were our motivation to win,” Yelinek said of the shirts the team plans to get to commemorate their perfect Powderpuff record.

With nothing to lose, the seniors would continue to play, but a Goncalves interception would bring an end to the game.

“I knew all along that we’d win. After three years, these girls are confident, and they take this very seriously,” said Woodman between celebrations with his team.