The difficult balance between athletics and academics 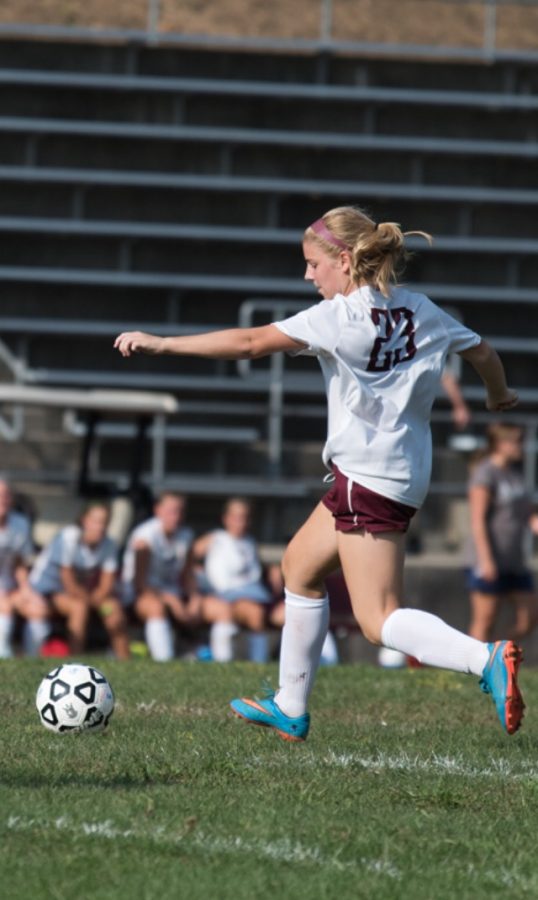 Jordan running the ball up the field

Managing time between school work and sports can be difficult, but Sophomore Mary Jordan pulls it off. Playing three sports makes it very difficult to do many other activities.

“I play soccer, basketball and tennis at Ludlow High School,” says Jordan. “Soccer is probably my favorite because I’ve played it the longest and it’s a really good team sport.”

Jordan started playing sports at such a young age that she can’t imagine not playing. “I’ve played tennis and soccer since I was five, and basketball since I was nine,” says Jordan

Her siblings really help her to perform well, especially when they, themselves, are athletes. Her older brother Matthew Jordan is the goalie for the Boy’s Varsity soccer team.

Watching her siblings play when she was younger really sparked Jordan’s interest.

“I wanted to do well to make them proud,” Jordan admits.

Jordan says her biggest inspirations are her siblings because watching them excel both academically and athletically makes her want to do good as well.

She also made the Varsity tennis team as a freshman. During the season, Jordan regularly played third singles and second doubles with partner, sophomore Mckenna Ryczek.

“Mary always had a positive attitude. She was always so calm even if we were losing a match,” says Ryczek.

Jordan is very proud on how the school’s tennis team performed last season.

“My team and I made it to the Western Mass Finals,” says Jordan.

As a freshman Jordan made LHS’s Junior Varsity teams for soccer and basketball. As a sophomore, she has started off making Varsity soccer.

“So far I have one goal and one assist,” says Jordan.

Being a part of the soccer team means a lot to her, especially since the team has such a strong bond.

“I’m honored to be apart of the team. Coming to the team new, I felt very comfortable and we are all like one big family,” says Jordan.

Jordan plays a vital role in the team dynamic.

“She is one of the first players off the bench for us and it is great that when she comes in our attack remains consistent,” says coach Kathleen Marino.

Throughout the season, Jordan continues to be dedicated to practicing so she is able to contribute to the team.

“In her first few games Mary was working out how to play as a single striker, but she has adjusted really well and become a really important part of our attack,” says Marino.

For Jordan, staying motivated in school can be very difficult, especially when she is worried about the big game later. There’s not much time for her to think about homework when she is focused on performing well.

“If I have a late game I like to go home, take a quick nap, and then get ready and focus on my game,” says Jordan. “There’s not time to worry about homework until after the game.”

A lot of sports have late games which means Jordan will be playing at night all year round.

“The latest games I have are at six or seven, which means I probably won’t get home until around nine. That also depends on if it is away and how far away it is,” says Jordan.

Doing homework so late is not always the best thing for Jordan, as she admits that these late night study sessions “make it difficult to focus when I’m really tired.”

These games can drastically affect the academic performance of athletes, especially if they were up late the previous night.

Sports is such a big part of Jordan’s life, which makes it difficult to put effort into anything besides athletics and academics.

“Most of the time we only get one day off a week but it depends on the sport,” says Jordan.

Mary Jordan is an example of a role model athlete. She focuses on her sports while still recognizing that academics come first. She balances her love for sports with the importance of an education and manages to excel in both matters.