LHS’ swim team kicks its way through the season 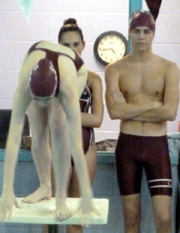 When listing winter sports the list often goes like this: basketball, hockey, and wrestling. Wait, aren’t we missing one? That’s right — swimming.

When thinking of Ludlow sports that dominate, swimming is often overlooked. Maybe it’s that they lack numbers, or that they practice and perform in the warm muggy Boys and Girls Club pool.

Either way, they prove a force to be reckoned with and a team to be watched as they kick, freestyle, butterfly, breast stroke, and individual medley (IM) their way through the season with great power, skill, and speed.

Although competitive, both the boys and girls teams lack freshman members.

The bulk of the boys’ team is made up of sophomores while there are only two juniors and seniors. The boys have a 5-4 overall record and have a 3-2 division record.

Coach Kerin Doyle still praises the boys: “Their team record (5-4) does not reflect how well they are swimming. We have such a small team compared to others, that we have won all or nearly all events in a meet, but still lost because we did not have enough swimmers to fill out the events and the other team did.”

The girls’ swim team is made up of 22 members. Two swimmers are freshman, seven are sophomores, eight are juniors, and five are returning seniors. The girls have 7-2 overall record and 5-0 division record. At this point the girls are tied with Chicopee High for their division title, Chicopee High is their last meet.

In regards to Chicopee High, Doyle states, “It will be a tough meet. They have some pretty fast swimmers too. They also have divers so automatically they have 13 points over us because we do not have a diving team. Essentially I have to overcome a 13 point defecit before we even start the meet. That is a pretty tall order. I have a lot of confidence in my swimmers. I know they will lay down some fast times in the pool. We win that meet, the girls win the League. ”

Both the boys’ and girls’ swim team look to send swimmers to Western Mass. and hopefully States.

They often say “slow and steady win the race,” but LHS’ swim teams speed looks to put them in first place.