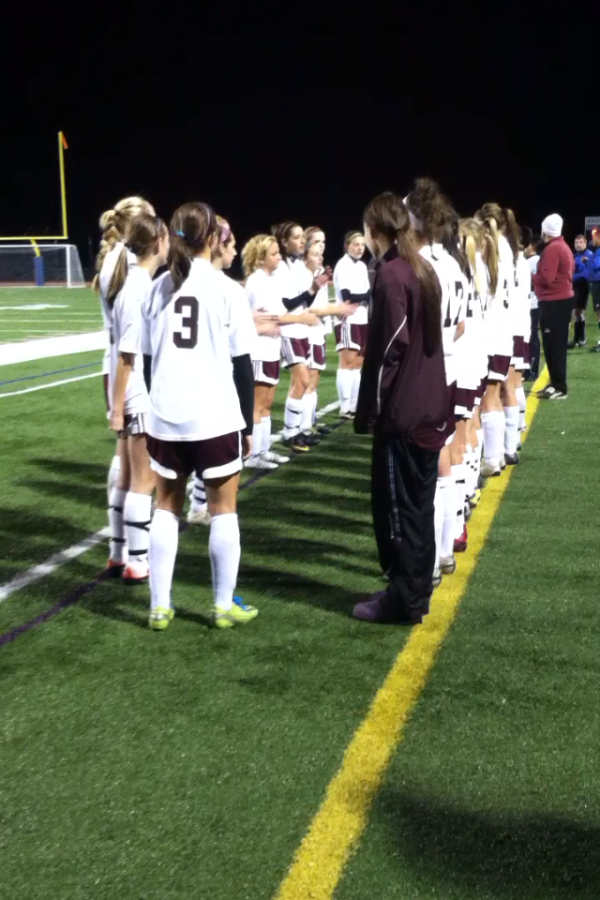 The Lady Lions line up for the starting line-up

The Ludlow Lady Lions hopped back into playoff mode as they faced the Agawam Brownies in the first round of the M.I.A.A  High School soccer playoffs. The game was played  at Westfield State University as a result of the damage caused to Ludlow’s home field from the recent snow storm.

The Lions entered the playoffs as the number 4 seed, and expected to advance to the next round.  Yet, only 10 minutes into the game, momentum swung in Awagam’s favor.

With a quick goal which trickled past Ludlow goaltender junior Meaghan LaPointe, the Lady Lions had to regroup and bounce back. Unfortunately, just minutes after, a left foot cross was sent through the box and kicked in out of mid-air. Rily Hellstein scored both goals for Agawam.

The Lady Lions dug themselves into a very deep hole, but senior captain Kaycee Pereira helped the Lions begin to climb out with a goal of her own just before the end of the first half.

Though losing on the scoreboard, the Lady Lions had shifted momentum in their favor. The second half consisted of good Lion attempts, but Agawam’s defensive clearances were too much for the offense.

As time ticked down, the Lady Lions did whatever they could to get the ball to the net, but unfortunately couldn’t finish with a goal as the Agawam Brownies went on to win the game 2-1.

The Brownies advance to the Semi-Finals, while the Lions are forced to face a disappointing finish to a hard-fought season.