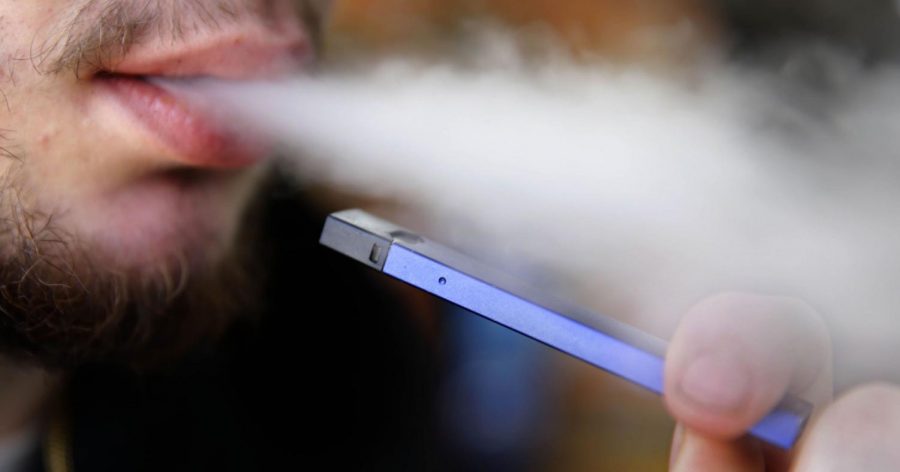 It’s become no secret: electronic cigarettes have blown up in popularity, distinctly so among teenagers. For the students at Ludlow High School, Juul, Soarin, Juno and Mods surround our daily lives and the people around us. They’re in the bathrooms, the locker rooms, outside and inside the school. This is a problem for the administration at LHS- more and more studies are coming out exposing the dangers of vaping, especially among teenagers (it’s most popular demographic). So, how has administration attempted to deal with vaping?

They have closed every single bathroom in the building, aside from four: the single toilet library bathroom and gender neutral bathroom, the gym bathrooms, and the D wing bathrooms.

This attempt doesn’t sound that bad to some. After all, didn’t I say that vaping took place in the bathrooms? Hypothetically, rooting out the main places for people to vape (aside from a few out of necessity) would discourage people from vaping altogether. However, this “solution” has merely made the lives of the unafflicted miserable without solving the vaping issue at all.

LHS has a school population of about 1000 people. During the school day, there are only about four toilets available for each gender. This, by itself, is a problem. Added together, that’s only a dozen toilets available for a population of one grand. Divided up, that means there’s only one toilet available for every 83 people. How is that fair for the common person? I understand that not everybody needs to use the bathroom at the same time (and some people don’t use school bathrooms at all), but having to share one toilet with 82 people is nowhere near fair. Imagine how long the lines would be which would only eat up more of a person’s class time.

However, not all of the bathrooms in LHS are usable. The D-wing bathroom, outside of Halpin’s office, is always full of people. Now, I won’t go around accusing people of things that I am not 100 percent sure about. However, I can confidently say that most of the people in the D wing bathroom are doing anything but using the toilet. Remember — is the most accessible bathroom for most classes with every other bathroom locked. Imagine trying to use the urinal with nine people watching you! It’s a feat few men can claim to overcome.

While these inconveniences are annoying, they are not unbearable; after all, they are done with good intention — to stop vaping in Ludlow High School. However, these intentions and efforts are done in vain. I have not witnessed a decline in vaping ever since the administration locked the bathroom. As a matter of fact, I’ve seen it grow. People who I could’ve sworn would never touch a Juul in their lives are vaping in front of my very eyes. I don’t think closing the bathrooms made vaping more popular, I think that closing the bathrooms merely hasn’t done anything to stop vaping.

Here’s the fundamental issue with how LHS deals with vaping — very few people actually vape in the bathrooms. Many do it in the privacy of their homes, or with their peers. Closing the bathrooms doesn’t root out the main places people vape. Rooting out common vaping places is not the answer to vaping. It’s merely too easy to hide away from a watchful eye. The real solution to vaping is active campaigning. LHS administration should make direct steps toward eliminating vaping. Assemblies sponsored by the anti-tobacco agency truth.org or other similar organizations should be put together. Perhaps a follow-up show to the Believe in U show aired every month. I can’t offer a direct solution to it; but I’m sure there’s better options than closing the bathrooms.

Before we close this article, I would just like to give my stance on this issue. I sound like a staunch, anti-vape activist throughout this article. Frankly, I couldn’t care less if you vape. Vaping isn’t the issue for me — the issue is the poor attempt at clean up the LHS administration gives. Closing the bathrooms merely inconveniences both students and teachers