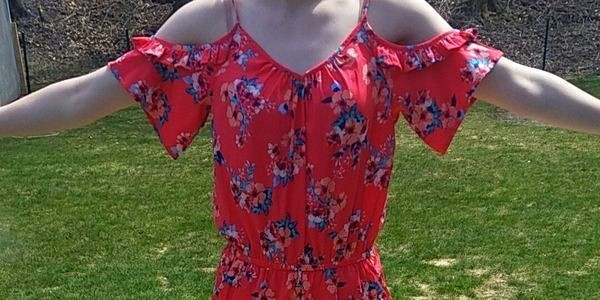 Junior Emily Midwood says Ludlow High School's dress code "sexualizes" girls after her sister was allegedly "penalized for wearing a romper that exposed her shoulders," according to her online petition.

The school dress code has been a touchy topic for years. From hats to headphones, the school has cracked down on what people wear. With a whopping 18 dress code restrictions in the student handbook, there are some who believe it is time for the dress policy to be revised.

The issue of the dress code has been on the backburner for years, with students complaining amongst themselves about being asked to remove hats in the halls or to pull up one’s pants. But these are not the major problems with this policy.

Clothes, like speech or religion, is protected by freedom of expression under the first amendment. Of course, though, there are limits to this, especially in a place like school. But there is a far greater limit on the clothing girls wear; a limit far surpassing that of the boys. Six restrictions are specific to females and the other 12 can be applied to them as well as the boys. Some of these restrictions are reasonable, like no see-through clothing or exposed undergarments. But it is the restriction on visible shoulders which has prompted a recent outcry.

A Ludlow High School student was sent home after arriving at school in a red, floral romper that revealed nothing more than shoulders. This was not a provocative outfit, nor overly revealing, but it was treated as such. This student was sent home and forced to change into different, “less suggestive” clothes and then could return to receive her education.

The student who was dress coded wishes to remain anonymous. Luckily, there are those who would, at the drop a hat, rush to defend this student and her rights. The most prominent of these people is junior Emily Midwood.

Midwood has not hesitated in the past to fight for what she believes in. She has been an advocate and prominent voice in many controversial issues, lending her voice to the fight to regulate guns and to keep them out of the hands of teachers. This aspiring revolutionary is cut from a different cloth than the rest.

Now Midwood leads the charge against the dress code, calling for change. Midwood started and circulated a petition to help change the regulations on the dress code with a goal of 1,000 signatures. But after being up for less than two weeks, the petition has gone global with over 10,000 signatures and growing. There have been local people signing as well as people as far away as Quebec, Ireland, Malaysia, New Zealand, and many more. This issue is a global phenomenon and people everywhere are ready to fight.

When asked why she feels so passionately about this topic, Midwood said “girls should be allowed to show their shoulders because they are simply a part of our body. It is unnecessary oversexualization. There is nothing distracting about our shoulders or bra strap.”

Of course, Emily is not the only supporter of this change (evident of the 10,000+ signatures). Other students around Ludlow High School all have their own opinions and reasons for signing the petition

Sophomore Gizzelle Abanador signed because she believes that “the way you dress, or the way you express yourself, rather, should not affect how people learn.”

Junior Justin Dias, who passionately spread awareness and defended this petition, signed because here, and at other schools, the policy is poorly written and “filled with imprecise, subjective language.” Dias goes on to say that the dress code participates in “sexist targeting” and is “unfairly enforced.” Another point Dias brings up is that “the length requirements unfairly punish those with differently proportioned bodies” and the school enforcement will rarely punish athletic uniforms, like the cross country boys, who show up in singlets and short shorts, with staff “opting instead to go for girls who are…exposing their shoulders.”

The problem, Dias believes, is that the dress code is trying to “regulate the immature impulses of men” which isn’t something woman should be tasked with. In addition, Dias says that in order to fix this problem, the dress code must “be clearly and fairly written for all sexes and genders, and enforced that way too.”

The student body at LHS and the other signers of this petition are banding together, rolling up their sleeves, and are making a difference. This is a time where change is possible. Protests and petitions are on the rise and reform is on the horizon. The future is at stake, we don’t want to be left behind. The link to the petition will be left at the bottom of this page for anyone who would like to sign it.