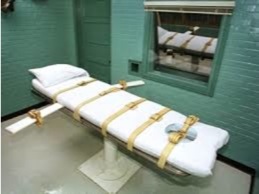 In early January of 2014, an inmate on death row named Dennis McGuire, was facing execution. He was being charged with the rape and murder of a pregnant woman. The state of Ohio, where he was awaiting execution, used a mix of two new drugs instead of the usual three. The United States received these from a pharmaceutical company until they recently stopped selling the certain drugs.

It took this convict 26 minutes to finally be pronounced dead. The usual takes around 15 minutes for the convicts heart to stop. Authorities report that the 26 minutes were constant gasping and snorting.

The use of these drugs was never before used as a mix in the U.S. The state of Ohio is being questioned on why this was used without being tested.

The U.S is weighing their options on where to go next with capital punishment. Some states are allowing gas chambers when there is no lethal injection left to use, while others are thinking of bringing back firing squads.

Some states are calling for these old, “new” ways of punishment, I believe bringing back firing squads and gas chambers are a downfall to the United States; we’ve come so far as a nation to just to back to using old ways. They are in the past for a reason, they should remain there. Gas chambers and firing squads are uncalled for, no one should suffer through torment like that; it goes against the United States 8th amendment.

The decision on where to go next with the death penalty shouldn’t be rushed into, it takes each state to decide together.

After so many years with the lethal injection drug as the main execution method, it’s suddenly nearly gone. The ways of capital punishment will change and some will want to abolish it complete.

I don’t think capital punishment will be completely abolished, although some new states may ban it, but will find new ways to execute and inmate. Whether it’ll be gas chambers, firing squads or even a new injection drug the U.S capital punishment policy will change.