It’s the end of the world and I know it 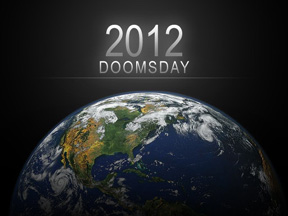 December 21, 2012: The first thing I do when I wake up is get rid of everything unnecessary in my life — including clothes. Then, I’m going straight to United Bank to withdraw all my cash and blow it on things I’ve always wanted, including salt & vinegar chips, an apartment, and anything else I’m inclined to buy spur-of-the-moment. And if you were ever on my bad side, you can expect a few eggs thrown at your house. I plan on going wild, being obnoxious, and if you are around me, you will notice.

Let’s rewind to when I was in third grade.

Mom, what if there’s ever a tornado?

That kind of thing doesn’t happen around here.

Now fast forward to January, 2011, when schools closed for weeks because too much snow threatened to collapse roofs. Then, sure enough, the tornado-that-doesn’t-happen-around-here did, indeed, happen in June. Then some micro-bursts. Oh, then the hurricane. And then an October snow storm that knocked out power for days and closed schools for a week.

Coincidence? I think not. The Mayans are right, and the end of the world is coming.

The Mayan Calendar ends on December 21, 2012, and sources say that Mayan Time Science is our most valuable tool for charting the future, as it was used across central Europe for years. Something that was used as the only calendar for years has to have some type of truth to it.

Is it coincidental that New England didn’t see any severe weather until  recent times? Or that a calendar that has been used for years just ends randomly? Or that the date for this foretold apocalypse is a sort of pattern: 122112?

People may blame all these spontaneous storms on global warming, but maybe they’re just too afraid to admit they believe something out of the ordinary. How can all these irregular happenings be ignored like they are no big deal? It’s difficult to believe something abnormal, but it is very easy to make up reasons that seem to make sense and call it “science.”

Some say people just believe everything they hear, but if that’s the case, why did no one think the world was ending last year when that was the rumor going around? The idea of the end of the world coming sooner than we think is not just some made up story. There are mathematical and scientific facts behind it, and it has been assumed for awhile now.

If strange things like these continue to happen throughout the first half of 2012, will people start to believe it?

I can’t speak on behalf of anyone else, but I know I’ll be living next December 21 like it’s my last.