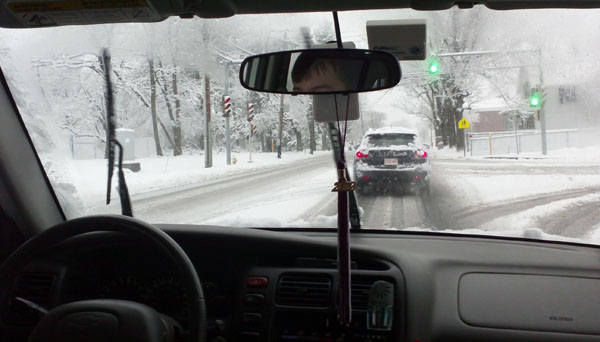 The morning of  Friday, March 8, many students sat by the phone and TV anticipating a delay, but instead both students and teachers were forced to brave the conditions and drive through several inches of snow, causing late arrivals, multiple accidents and close calls.

With at least four inches of snow fallen before students left Friday morning, kids and teachers alike arrived late and had trouble controlling their cars on their way to school.

“It was so slippery, I slid a couple of  times,” says senior Ava Adamopoulos about her drive to school.

Senior Disha Patel said, “ Until the school system buys me a car with four wheel drive I refuse to drive in the snow again. My car didn’t stop at stop signs and my car couldn’t turn, I had to go 25 the whole way.”

Not only did students slid and slip their way down the road but multiple kids crashed into snow banks and some students even crashed, such as senior Morgan Doherty.

Even those with multiple years of driving experience had trouble driving to schoo..

Even though teacher Brian Bylicki was on time he said, “ it was dangerous driving in. The roads had not been completely cleared, and I live close enough and still had trouble.”

Teacher Jennifer Prior also had a scary experience as she made the trek to school.

“I almost got into two accidents getting to school,” said Prior.

Prior was lucky though, as teacher Shannon Ramah got into an accident that had her stuck in her car and unable to attend school.

It’s because of these close calls and accidents that teachers and students alike cried out for a snow day and were outraged when their cry was not answered.

“It is a day worthy of a two-hour delay,” Bylicki says best as he expresses the feelings of many faculty and students.

Superintendent Todd Gazda later posted on the new Ludlow Public Schools Facebook page that the information he received earlier that morning ended up being incorrect and that there should have been a delay.

“ I agree… that is was a mistake not to have at least a delay this morning. I was monitoring the situation, but didn’t get accurate information quickly enough this morning. This was a breakdown in the lines of communication within our school system,”  he said.