Mr. Martin: The King Of SPAM

Math as a subject can be quite boring. Students usually don’t want to pay attention in a dull class where they understand little to none of the subject material. That’s why having an entertaining and engaging teacher is important. In order for students to learn a boring subject they need to have a reason to pay attention. Mr. Martin is by far one of the most interesting, engaging, and likable teachers at Ludlow High School, he is always fun to be around, and he manages to get students to actively participate in learning math.

A quick-witted and enthusiastic individual, Mr. Martin has been teaching at Ludlow High school for ten years. He went to College of the Holy Cross where he got his undergrad in math, and he went to The University of Albany where he got his masters in math education. Right out of college he substituted and found he “enjoyed the setting” and math, so he “put it together” and became a teacher. Before subbing he wasn’t sure what profession he wanted to pursue, but he found his love for teaching and decided to follow it.
A Day in the Classroom
When one walks into Martin’s class, they’re immediately greeted by a smartboard picturing whatever his new interest for the day is. Some days it’s a beautiful landscape, others it’s Krampus, while the next it could be a random dog or even a picture of spam. Past the smartboard sits the man himself. Next to him on his whiteboard he has pictures of his children, and three jars of spam. He can almost always be found in conversation with one of his students, laughing with them or helping them with their work.

Once class starts Martin goes full force into teaching. His favorite subject, both in general and to teach, is geometry. He keeps his lighthearted demeanor, but he makes sure to teach the material. He flips through the slides and doesn’t slow down, always keeping a quick pace to make sure all the material is covered. Andrew Lynch, a junior who had Mr. Martin his freshman and sophomore year, said that Martin “taught through laughs” and “taught his lessons extremely fast.”

But it’s the fast pace that keeps the class refreshing. No day is exactly the same—the material changes and grows just like the relationship between Martin and his students. Each day is a new surprise waiting to come to fruition. Walking into his classroom you never know exactly what to expect other than laughter and a new experience.

He stays after school 2-3 days a week, and if someone decides to stay after school for extra help he makes sure they leave understanding the material as best they can. Students who don’t even have him that year will go to him for after school help—whether it be because they trust him to help them understand the material or simply because talking to Martin can always brighten their day.
Food
At the beginning of the school year Mr. Martin asks his students their birthdays. In his classroom he keeps a bag of Dum Dum lollipops in a drawer. When a student’s birthday comes around he lets them take a lollipop. It’s a tradition that he doesn’t remember how it started, but he “tried to start writing down birthdays just so he could recognise them” and it ended up becoming a staple in his teaching. Many teachers don’t do anything for their students’ birthdays, so a small gift like a lollipop can make a student’s day.

Going from sweet to savory, Martin is obsessed with Spam. And when I say obsessed, I mean obsessed. He has cans of it just sitting as decoration in his room. He has a tiny can on his whiteboard that’s hung up by magnets. Some days it’s his background on his smartboard. He even has a spam Christmas tree ornament that he hangs from a tiny tree that he keeps in his room around Christmas time. When asked about his love for spam he said he “learned how to use it when he went camping.”

Spam really is a big part of his persona. Abby Cruz, a junior who was taught by Mr. Martin both this and last year, told me that one of her favorite memories of his class was when he “made a pyramid of spam.” During the school food drive Martin will only accept spam, so as students bring it in he stacked them into a pyramid to the point where they covered a large part of his wall.
Remote Learning
I had Mr. Martin as my math teacher both freshman and sophomore year. For me, his class during remote learning was the only one I feel I truly learned in and wanted to pay attention in. His love for the subject material and the way he would joke around with us (even when we had cameras off and mics muted), made my school days feel more involved.

Having had him freshman year, he already knew about me and my hobbies, so he would joke with me, making it almost like being in person. He would engage with the students even when he “came in everyday and stood in an empty room” which, according to him, was “not easy.”

Other students who had his class last year agree that even during remote learning he made learning math easier and was helpful. Abby Cruz said that even though she “struggled a lot in quarantine to do math,” Mr. Martin was “always patient.”

Being online definitely made learning far harder for students to learn and for teachers to teach, but Mr. Martin adapted. Andrew said that Mr. Martin “reworked his entire lesson plans to make them more compatible with Google meet and stuff.” While many teachers struggled to teach when remote, Mr. Martin was able to continue to teach well.

When asked if a photo could be taken of him, he said “I’ll send you one” and proceeded to email me a picture of his memoji (something he put on screen during online school when his camera wouldn’t work). 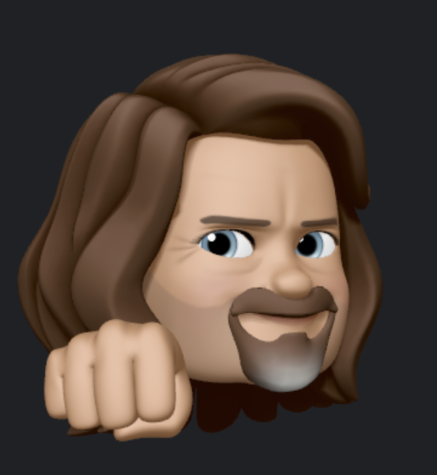