Behind the scenes with LHS twins 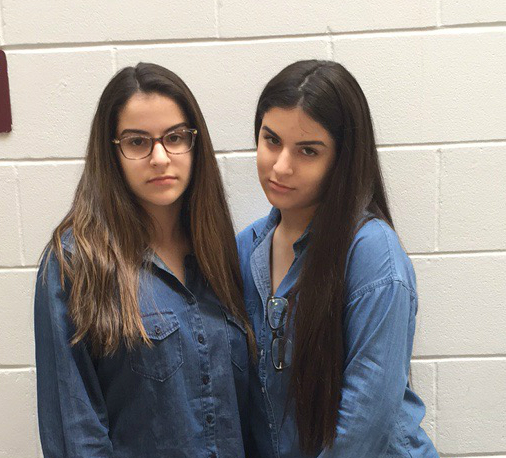 Ever wonder what it is like to have a twin? Could you ever imagine there being two of you? I asked two sets of twins questions about their life growing up, how it has changed as they got older, and the struggles they have faced having a twin.

A common factor among twins is that they tend to share everything from clothes, a bedroom, and especially birthday parties.

Senior Lauren Martins explained what her years of having a twin always by her side has been like. As far as sharing things, Martins says “I grew up sharing everything so I got used to it, but as I got older it got really annoying.”  Martins has had to share a room, a phone, and clothes with her twin.

There is always the struggle for parents to not compare siblings to each other and treat them equally. It becomes even more challenging when someone has to compete with a twin who may be participating in the same sport or taking the same classes.

Lauren says she never really had a problem with her parents comparing her to her sister Morgan, except “for when it comes to grades.” Overall she feels as though her parents did a good job with letting her be treated separately from her twin.

There are myths about twins being able to communicate with each other like no other siblings can. Lauren claims there’s no “telepathy” happening, but “sometimes we do stuff like say the same thing at the same time.” She said there’s a few other strange coincidences that happen, but nothing too out of the ordinary.

Growing up with a twin can be a wonderful thing. She can be your best friend or you can think of her as just another person with whom to fight. Having a twin “is both great and bad. We argue but she’s my best friend.”

Making friends is something Lauren finds the most challenging, because “we make our own friends but we all end up becoming friends with each other.” She says there’s nothing wrong with that but she wants “her own friends and social life.”

Now that she is older Lauren is starting to live a seperate life from Morgan. As college soon approaches, she is “excited to finally be independent.”Also she says she is going to miss her twin, she is so happy to be her own person and “not have people confuse us constantly.”

Overall Lauren says “being a twin has its ups and downs, but I’m glad I am one.”

Morgan feels similar to Lauren as far as sharing things. She agrees that it can be very frustrating. Morgan says she not only stuck sharing a room and clothes, but “we also share the same DNA!”

Morgan doesn’t believe their parents compare them too much. “They treat us individually because they know we’re different people with different skills.”

As far as twin telepathy and being able to read each other’s minds,  both twins agree that nothing like that is going on. But Morgan also says that they “say similar things or have similar reactions.”  She says they have similar mindsets and process things the same.

Both Morgan and Lauren feel as though the experience of having a twin has given them “built-in best friends.” Morgan adds “it’s easy to talk to her, plus it comes in handy for family trips because I always have someone to keep me entertained.”

Morgan doesn’t feel that having a twin is in any way challenging. She says if anything it makes life a little easier. The only thing that annoys her is the “fact that people still mix up our names.”

Both girls are very excited about college and living their own separate lives. But she agrees that by going to college, she’s going to miss being with Lauren, because they’re so use to being together.

Overall she says being a twin has made her life better because she always has “someone to depend on,” and she “can count on her being there.”

Twin junior boys Jack and Dave Gamache, also gave their opinions about what it’s like being a twin.

Similarly to the Martins twins, Jack says “we had to share everything from a car, to a room, and even sports teams.” Of course like anyone else they need personal space, which can be hard sometimes, but they have come to live with it and make it work.

Jack also says that they never really had a problem with their parents comparing them, “only in sports.” Their parents never did this in a malicious way, “simply comparing how each other played and reacted in certain moments to enlighten us.”

Jack has the exact same experience with the Martins twins as far as telepathy goes. He explains that nothing supernatural is going on, but “we can assume each other’s actions and words sometimes.”

Dave agrees that “having a twin has given us more of a friendship,” but no matter what there is always going to be fights with siblings.

Dave actually also finds having a twin makes life easier because “one of us can introduce the other one to people that the other may not know.” He also believes it gives them an advantage in sports because they were able to learn from each other, and work together on the field during soccer games.

They both have mixed feelings about going away to college and not seeing each other as much. But, Dave says “it will be interesting to see how we do on our own.”