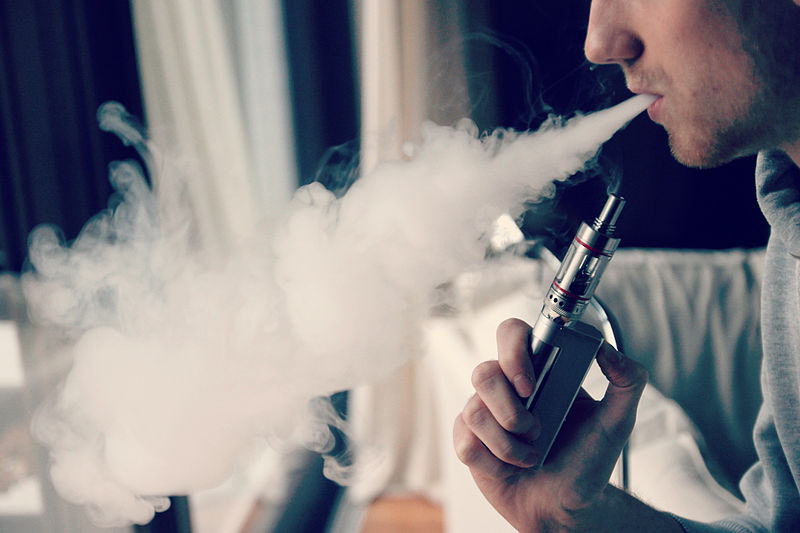 We’ve all seen it, the Snapchat and Instagram stories full of smoke clouds. The concept of vaping is not uncommon at Ludlow High School, as its popularity has increased in recent years.

A vape, short for vaporized electronic cigarette, does not burn anything like a traditional cigarette. The device features an exchangeable inhaler cartridge, packed with a mixture of vegetable glycerin, polyethylene glycol, flavoring, and nicotine, according to Karl Tate from Livescience. This concoction is commonly referred to as “juice” among its teenage and young adult users. Juice flavors range anywhere from creme brulee to mango.

Tate describes the process of vaping as, “with every inhalation, a sensor triggers a vaporizer to heat a small amount of the liquid favoring [also known as juice]. The liquid turns to vapor and is drawn into the user’s mouth.”

Vaping is seen as a safer form of hookah, a water-pipe that, when burned, creates cancer-causing chemicals. Due to vape’s seemingly “safe” aura, it has become a popular pastime with a lenient view as there are worse possible alternatives available. Like marijuana compared to cocaine — there’s no question really as to which one is “safer.”

Although some users believe that vape is safer than hookah, it is not necessarily true as the dangers of vaping lie in the formulas of the juices people use. Juices can vary in its flavors and nicotine levels. Since vapes are tobacco-free, they are unregulated in the United States, according Scientific American.

Nicotine, which is a common ingredient in “juices” is highly addictive with a long list of increased health risks including developing psychiatric disorders, disruptions to working memory and attention, and lasting cognitive impairment according to K. Vendrell Rankin, a professor and associate chair in public health sciences at TAMBCD.

Nicotine is highly addictive, quickly journeying to the brain and leading towards a short-lived feeling of relaxation. When the nicotine leaves the body, users begin to suffer withdrawals, prompting users to attempt to satisfy their cravings by repeatedly smoking.

Although e-cigarettes have a lower of toxicant levels compared to conventional cigarettes, these modern, technological versions possess an equal or higher level of formaldehyde and metals.

Students who prefer to vape or use electronic cigarettes says that it smells better compared to the stench of conventional cigarettes.

Formaldehyde is a colorless, strong-smelling gas and is known to cause cancer of the nose and throat, states the Centers for Disease Control. The exact level of formaldehyde exposure which leads to cancer is currently unknown but higher exposure heightens the risk of a diagnosis.

Charles Pope*, a student at Ludlow High School, confesses to vaping multiple times a day, even admitting to occasionally vaping in school, in several locations he’d rather not disclose.

As he talks of the reasons to vape, he sits nonchalantly in a bustling, jam-packed coffee shop, taking out his own vaporized, electronic cigarette to demonstrate the process, unconcerned about the crowded, public environment.

“It gives me a relaxed, lightheaded feeling,” admits Pope.

Such a feeling could be related to the nicotine containing juice formulas.

Vaping has also grown in popularity as it has become easily accessible as it can be purchased  through online retailers. By simply stating that you are eighteen (whether true or false), various sites, such as VaporDNA, Vapor World, and Vapor Beast, open up where anyone can purchase vapes, juices, batteries, chargers, kits, and more with merely a credit card.

Pope, a persistent user and casual conversationalist of vape, admits to using the device as a form of entertainment, “it’s an easy way to pass time. I wouldn’t ever vape on my own unless it’s for snapchat. I do it with friends as a way of socializing.”

Pope isn’t the only student to vape in social situations. Andy Johnson*, another student of Ludlow High School, confides that he too, “vapes[s] as a pass-time” doing so “only with a group of friends.”

Along with vapes, smaller, more innovative devices called juuls and junos are growing in popularity. Shaped similarly to a USB flash drive, a juul is lightweight and miniscule compared to a vape. Due to its size, a juul is more travel friendly alternative to a heavier, clunkier vaporized electronic cigarette. Juuls also use replaceable pods which contain more nicotine than vapes.

While vaporized electronic cigarettes come with both nicotine and nicotine-free options, juuls are solely nicotine-based without alternative.

Connor prefers to use a juul with a nicotine based juice, saying “I juul because I like the head rush and the taste.”

With so many flavors available, Connor reveals his favorites include exotic flavors like mango and strawberry.

Many students at Ludlow High School utilize this popular, vaporized form of an e-cigarette, for both social media and gatherings. In a social setting, vape is generally used in a collective manner, passing a single vape around a group of two or more people at a time. It is common to see, when scrolling through student-posted Snapchat stories, pictures or videos posted onto an account visible by a user’s friends, to see either a single student, or a group, using and passing around the device.

Sharing of a single vape can become tricky as when passed around, users may be unaware of the level of nicotine in the particular juice concoction.

This miniature e-cigarette, and its counterparts juuls and junos, are able to be recharged with a single USB outlet for easy, continual use. Due to the need for a USB porthole, it has been reported that many Ludlow High School students have turned towards Chromebooks, school-issued laptops with two available USB outlets, as a solution in charging their vapes.

With the easy access and longevity of smoking products known as vape, juul, and juno, it is no wonder why it is a “go to” device for entertainment both at parties and at school.

* names have been change to protect identity