Extra Credit: How far will we go? 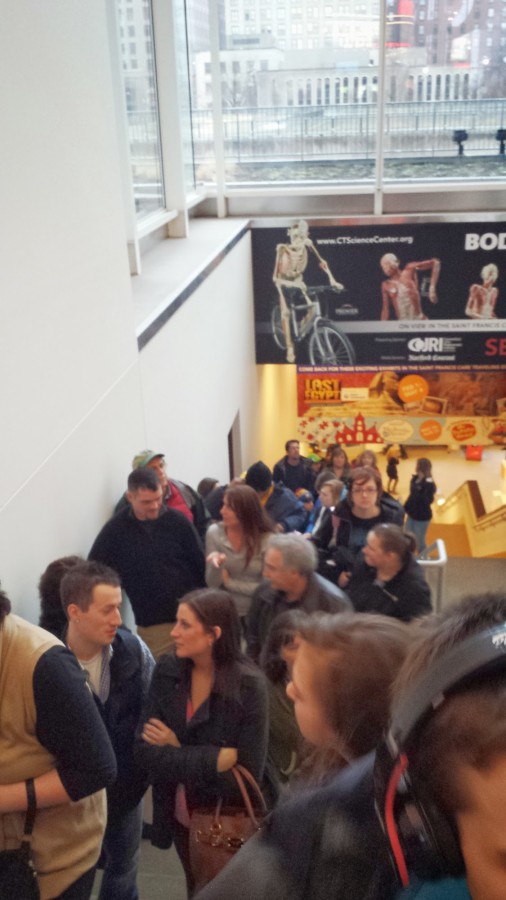 As a student and a freshman nonetheless, midterms were horrifying. So when the trip for my class to go se Bodies Revealed was canceled, my teacher ever so graciously offered bonus points. Points would be given to anyone who would visit the exhibit on their own and bring back proof that they had visited. So my dad and I set out for the Connecticut Science Center in Hartford, and I began to wonder how far students would go for the sake of bonus points?

Once we reached the science center we realized that things were easier said than done. The line cascaded down three long flights of dull, carpeted stairs. A large, frazzled family was in front of us and three wannabe hipsters lounged behind us. So I whipped out my phone and began a hardcore game of Bejeweled, and my father was playing Words with Friends, as usual.

After about an hour of listening to the impatient daughter of the family in front of us complain about how the advertisements for the exhibit “totally grossed her out” we had finally reached the desk. Or, more like the line to wait to get to the desk. Thankfully this line moved a little quicker than the last. As we moved up in line I looked around, the glass walls let in the grey light of the rainy day, and the buildings adjacent to us seemed so close I could touch them. I then looked up, seeing the exhibit three stories up, we we’re almost there.

We were just about to get our tickets, and the lanky man at the counter with sunken in eyes beckoned us forward. Just as my dad began to pull out his wallet an earsplitting screech came to my ears. The lights blinked red and the staff began to stand on chairs telling us to “clear out of the building” and that “this is not a drill.” Some panicked, grabbing their children like ragdolls and sprinting for the nearest exit. Most of us just stood, confused, because there was no visible sign of fire anywhere.

As we shuffled out of the building my dad grabbed a brochure. I now had proof for my teacher.  We were then told to get off of the plaza that was sheltering us from the rain; it was a hazard. So my dad and I walked in the rain back to the parking garage across the street. As I turned to look back four fire trucks were parked out front, firefighters with air tanks and hoses strapped to their backs barreled in.

We then passed the Latina and RV convention being held at the local Marriott, and made it to our car. Then we went for frozen yogurt and sang “Freeway of Love” all the way home.

That monday I came in and explained everything to my teacher , the fire, the long line, even the pamphlet i had tucked away in my bag that morning, just in case. In a true act of kindness she gave me the points.

Now that it’s all over I realize two things. First that midterms aren’t as scary as they seem, and second that in Hartford they can have RV’s and Latina’s at the same convention.