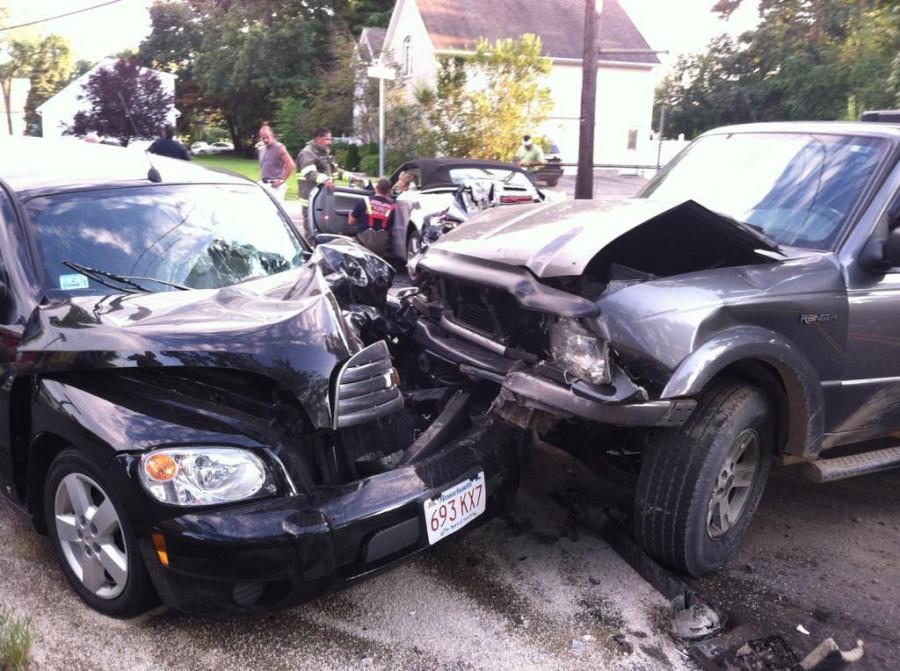 You’re driving home from a long day at work, Taylor Swift’s “Enchanted” blasting through your stereo and your sunglasses shading the setting sun from your eyes. You’re maybe going a couple miles per hour over the speed limit, and you really just want to get home.

Then a truck comes out of nowhere. All you hear is screeching tires and all you see is this black monster coming toward you. All you have time to do is close your eyes and involuntary take your hands off the wheel and cover your face before everything goes black.

And when you open your eyes, all you see is this: smoke. Lots of it. A broken windshield. A smashed dashboard.  Your airbag. You smell burning rubber and gasoline. Taylor Swift’s voice is still audible, and you touch your face to check for blood. You wiggle your toes, blink a few times, make sure everything’s okay. Your neck and back hurt but you figure you’re fine. Everything seems okay.

And then someone is there pulling you out of your passenger side door because your driver’s side door is smashed in and the good samaritan waits with you on the sidewalk because you can’t stand up because you’re shaking so hard. Adrenaline, you learn later.

Then, the ambulance comes to whisk you off to the hospital, your mom comes in your room crying tears of relief because you’re okay. You learn that the person that hit you was texting and going fifteen miles over the speed limit. Your precious car that was purchased  two weeks ago is completely totaled. If the truck was five inches closer to your drivers side door — FIVE — you would have been paralyzed. Or even worse.

This happened to me last August.

According to the Rocky Mountain Insurance Association (RMIA) in 2007, motor vehicle crashes are among one of the national leading causes of death for 13-19 year old males and females.

They also state that 16-year-olds get into the most crashes out of any other age, probably because they are just learning how to drive. Statistically, every two out of three deaths are males.

Sixty percent of teenagers that were passengers that died, were actually passengers in a car driven by another teenager. Among deaths of passengers of all ages, 18 percent occurred when a teenager was driving.

In Massachusetts alone, in 2002, a little more that 5,000 teenagers aged 16-19 died or were seriously injured because of car crashes, most of them caused by the own teenager driving.

Teenagers at Ludlow High School are not immune to these statistics.
Senior Alyssa Fialho, recently got into an accident outside of Friendly’s near exit 7. She was coming from Stivens Street so she was going slow. As many of you know, there are two lanes, one that goes to the highway and one that goes straight, or toward Dunkin Donuts. Fialho was in the right lane.

“I wasn’t going fast at all,” Fialho said, “I had just turned onto that street and there were a lot of cars.”

A car coming from the other lane crossed over- without looking- going about 35 miles per hour trying to get into the Friendly’s parking lot. The driver, a woman in a SUV, hit Fialho’s bumper and basically ripped the front of her car off.

“It sucks because I have a tiny BMW that’s really old and they had a big SUV. My car is totaled and while her insurance is paying for a rental, eventually I’m just going to get what my car was worth at the time of the accident, which isn’t enough to get a new car. It’s a crappy situation.”

Senior Patrick Klosek, who was the passenger in Fialho’s car at the time of the accident said, “Alyssa [Fialho] is a fine driver. And I don’t think there was anything we could have done to avoid the accident. We were driving slowly and that woman’s car just shot through traffic. There wasn’t much she could have done.”

Apparently, the women never even said sorry, and after getting Fialho’s insurance information, proceeded to get her ice cream at Friendly’s and leave Fialho to deal with the police.

Senior Andrea Persson also got into an accident in the same spot last year.

“I was coming out of Friendly’s and had to make a left turn. I inched out to cross the first lane but didn’t see anyone in the second lane over the cars in the first.”

Her car was slammed with another, damaging both cars and leaving Persson with the blame.

“Technically it is my fault,” Persson admits, “I’m trying to fight the charges though, I have a hearing next week.”

Accidents increase in the winter because of slippery roads and careless drivers not watching out for people around them.

The last snowstorm we had, I was driving home with my friend Cheyenne. We were driving along a side street in Westfield, trying to get to my step-moms restaurant safely, probably going maybe 15 miles per hour.

Taking a turn, my car fish-tailed and we slowly went into a snowbank. Neither Cheyenne or I were hurt, as we were going really slow, and no damage was done to the car, but it was still scary. If there had been other people close to us on the road, it could have been another accident that could end up in one of us getting hurt or our cars being damaged.

I cannot stress enough how careful you have to be on the slippery roads this winter. Although you might be a fine driver, it doesn’t matter how fast or slow you are going. Other people could hit you, and you can get seriously injured.

Although accidents in Massachusetts, as well as nationally, have decreased over the past few years, they still hold one of the top reasons for death and serious injury among teenagers in the United States.