Students addicted to “Words with Friends” 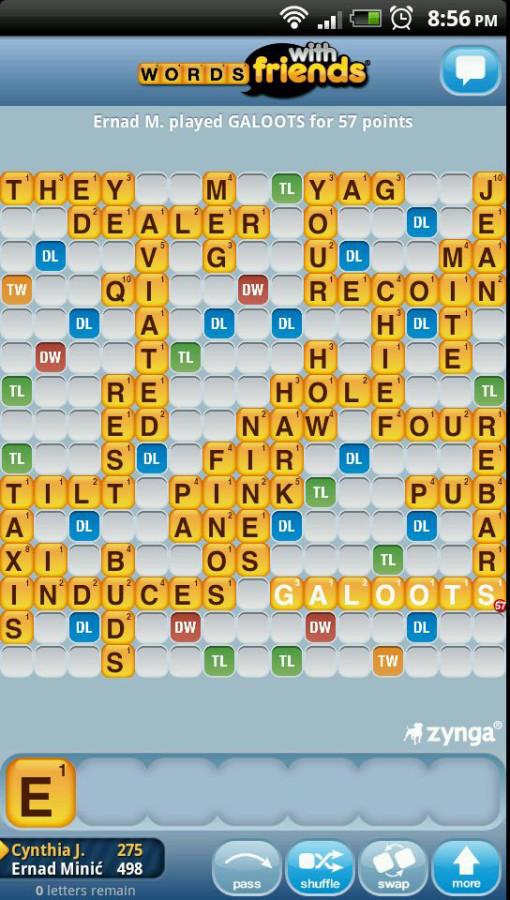 It doesn’t matter whether I’m in line waiting for some hot chocolate, riding in the back of my friend’s car, or bored out of my mind in the back of history class, the hot app Words with Friends  by Zynga never fails to entertain.

You can download this electronic pocket version of Scrabble from the Apple store or the Android marketplace. From the desktop it can be played on Facebook. Players can compete against a predetermined “friend” or a random opponent who’s looking for a game.

If you use a Facebook login, your Facebook friends who use Words is automatically synchronized with your Words with Friend’s friend list. A player can send out a request to play and then make the first move. If his or her “friend” responds, the game is on.

Each player gets seven randomly-chosen letters to play on the board. Once played, the opponent receives a notification on his or her mobile device that would say something like, “Ernad played ‘hello’ for 5 points.” The next step is to accept or decline their request.

“It’s exciting to get a request,” says junior Audrey Pilon. “Some people from school that I don’t even know have requested to play and I have since become friends with them.”

While playing the game, there are a total of 39 achievements that a player can unlock. For example, there’s the “30-point word” achievement. This motivates the player to play words with larger point values in order to unlock these achievements.

However, be aware of cheaters. Some players will assemble random letters and guess words this way, or use websites on which they can replicate their boards and enter the letters they currently have. The website then generates a word based on the letters that will garner the most points. Some people even go as far as to pay for a different version of Words with Friends that allows them to play words that don’t even exist.

Fortunately, the cheaters are usually outed via Facebook. People who’ve played them usually post statuses about their unfair ways, and the fair players can easily avoid the cheaters.

So I’m not going to concern myself with cheaters. Besides, I just got a notification saying it’s my move and I’m winning: 498- 275.