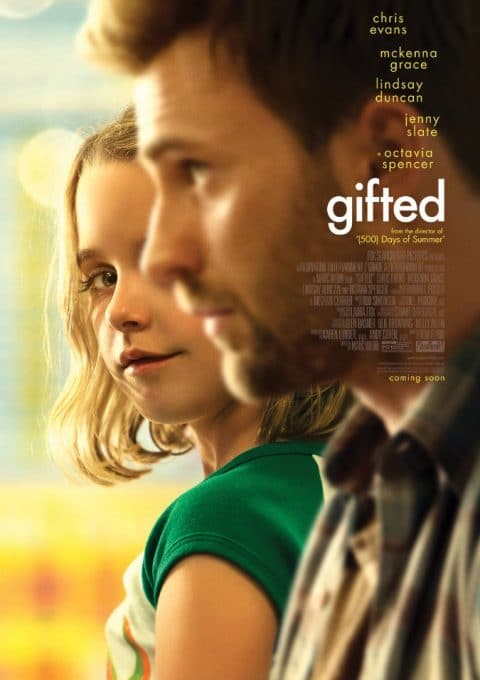 Many Marvel movie fans can only see Chris Evans as the heroic Captain America. Differing from this typecasted “hero” (Fantastic Four and Captain America are perfect examples), Evans plays the role of a lonesome parental guardian named Frank in Gifted. Newcomer Mckenna Grace plays Mary, his brilliant 7-year-old niece who’s attending public school for the first time. When it becomes clear that her intelligence level is years above that of the other kids her age, and that she is dealing with severe social interaction issues, Frank struggles with the realization that he might lose custody of her.

Frank is a troubled individual. With his sister’s death and her decision to leave her sixth month old baby on his couch, he’s done the best he could. He’s provided a safe and loving home for a beautiful little girl who’s lost both of her parents. He works hard to keep the lights on and in his downtime, he homeschools Mary until he has nothing left to teach her. She’s an avid reader and she can do any math problem you put in front of her. He decides to send her to the local elementary school, where all of his problems truly began.

At first, Mary’s teacher, Bonnie Stevenson, is not too keen on having a pretentious little genius in her class. Mary clearly doesn’t get along with the kids her age, far more mature than any of them could hope to be. She surpasses them in every way, finishing tests and quizzes in seconds. When Ms. Stevenson recognizes Mary’s potential, she’s quick to help her learn and grow at a pace that fits her better. This includes a suggestion to Frank along the lines of sending Mary to a private school better fit for brilliant young minds. Enter Mary’s grandmother, Evelyn, ready to whisk Mary away from her uncle and her home to place her in a prestigious private school in Boston. Frank, who argues that Mary is just a kid who deserves to have a fun childhood without being forced to focus on math and only math, is furious and ready to fight for his niece.

With the talented Octavia Spencer playing Roberta, their loving next-door neighbor/caretaker, it seems as though Frank should have no trouble retaining custody of his beloved Mary. What Frank isn’t prepared for is his mother’s ability to obtain a fantastic lawyer. She’ll do anything to take custody of Mary. She’s after the little math prodigy, wanting to use her brilliance to her advantage. Unlike Frank, Evelyn doesn’t really have Mary’s feelings in mind, only her own wants. This leads to a few broken hearts and even more tears from the sweet little Mary and the strong-willed Frank.

At only 10-years-old, Mckenna Grace has established her place on the big screen. She’s insanely talented and it’s clear that she loves her job. She brought Mary’s compassion and brilliance to life with ease. Her character is witty, sweet, and mature far beyond her years, qualities that few children her age would be so willing to perfect. Her talent and charisma expertly complemented Chris Evans’ portrayal of her uncle, Frank.

A fierce custody battle, lots of tears, and even more hurt feelings later, and the struggle is over. Mary is in a good place and so is Frank. But are they together? One can only hope. Gifted is a fantastic film with lots of heartbreaking moments but lots of heartwarming moments as well. If you love to laugh and cry in one sitting, Gifted is the film for you.