The Fault In Our Stars: a rivioting teen novel 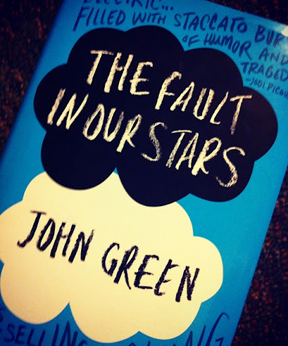 A good book does one thing- it makes you feel something. It makes the reader become so emotionally attached to the characters that you learn the same lessons and feel the same heartache and joy. I’ve read very few teen novels that do this better than John Green’s The Fault in Our Stars.

The Fault in Our Stars, although a teen novel, is a book I will recommend over and over again for everyone to read until everyone finally gets tired of me talking about it. Even then I might not stop because this book has such strong lessons and moving situations that it makes you reflect and think about how easy you have it but also about how fast life comes at you.

Sixteen-year-old Hazel Grace Lancaster has terminal cancer, the only thing prolonging her life is the miracle drug she’s given to keep the tumors from growing. In an essence though, she is a ticking time bomb.

Hazel’s life consists hanging out in her house with her parents, reading, attending classes at the local college because her homeschooling helped her graduate early, and going to her Cancer Kid Support Group.

It’s at her support group that she meets Augustus Waters, friend to soon-to-be blind group regular Isaac, and in remission for osteosarcoma after losing his right leg. The peculiar seventeen-year-old boy is afraid of oblivion, loves video games, is obsessed with metaphors, and has cigarettes but doesn’t smoke.

Both find a strange form of comfort in each other as they bond over their wise and odd views on the universe and Hazel’s favorite book An Imperial Affliction.

It’s these characters’ chemistry and their witty, sardonic, and philosophical outlook on the life they were given that makes this book so thought provoking.

Hazel’s fear of hurting anyone close to her when she leaves, and a parent’s struggle to cope with the fact their child will leave the world before them. The innocence and uncaringness of young love, and the will to forget the consequences and live in the moment. Each theme in the book  shows the struggle of having hope when everything around you is telling you hope is useless.

All in all, between the plot twists and turns and Hazel’s internal struggles, its everyone’s  battle and way of dealing with the monster known as cancer that really affects the reader and leaves them in a speechless awe and appreciation after reading the novel.

“Sometimes, you read a book and it fills you with this weird evangelical zeal, and you become convinced that the shattered world will never be put back together unless and until all living humans read the book.”- Hazel Grace Lancaster.