Twelve: the drug movie with a rich kid twist 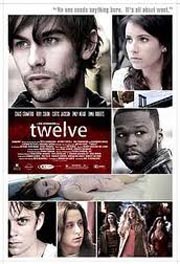 Twelve, which can be found on DVD, was one of those movies that made my jaw drop at the end… I couldn’t even grasp what had happened and just stared at the screen as the credits rolled down all the way till it went black.

The movie starts off with White Mike (Chace Crawford), the prestigious drug dealer to the rich spoiled brats in the upper east side of Manhattan. When they come home from boarding school for vacation, most of their parents are on lavish cruises in the Caribbean, leaving their party craving, drug searching, non-adult supervised teenagers home alone to throw epic parties filled with champagne, weed, sex, and a liquid drug called twelve.

However, the movie is not only told through the eyes of the characters but a narrator whose voice is Kiefer Sutherland. The narrator talks throughout the whole movie telling each of the kids’ pasts and gives gruesome details in a monotone voice, even as he repeats the phrases “masturbated,” “sex,” and “bang her out” numerous times. He says it as simply as if the words he is repeating over and over have no affect on the lives of these fortunate teenagers.

He reveals that White Mike used to be one of the rich kids until his mother died from breast cancer, and his father went bankrupt paying her chemo bills. So White Mike takes to the streets after dropping out of his senior year to make money of his own by dealing marijuana to these rich stoner kids. White Mike makes the money he needs because he doesn’t drink, he doesn’t do drugs, he just deals.

White Mike lives sort of a double life. He has his longtime childhood friend Molly (Emma Roberts) who is a sweet, innocent, young teenager, and has no idea that Michael (as she calls him) is a top notch drug dealer known by all the teenage Manhattan elite.

We are introduced to Charlie, White Mike’s cousin who is a hardcore cocaine user, and Hunter, White Mike and Charlie’s longtime childhood friend. Shortly after the movie begins, Lionel (played by 50 Cent) who is White Mike’s supplier and the dealer of twelve, roughs Charlie up for his cocaine money and shoots him with his own gun. Then Lionel shoots Nana, a poor black kid that plays ball at the rec center with Hunter. Ironically, Hunter has Nana’s blood on his shirt since they had a fight at the rec that same day, so he is the prime suspect for the murders.

Now we are introduced to the fortunate souls of upper east side of Manhattan. There’s Chris, the quiet, good son, virgin, who is persuaded to throw an epic bash on New Year’s Eve since his parents are away. But in the mist of his richness is his crazy, samurai sword and piranha owning, ex-cocaine using, jealous brother Claude who ran away from boot camp and is bound to unleash trouble. We get to meet the infamous Sara Ludlow, the most desired upper east girl, who uses her flirtatious manner to get what she wants, no matter the cost; she persuades Chris to have her 18th birthday party on New Year’s Eve at his house stating, “Don’t you want to be known for having a famous party?” Then we have Jessica, the straight-A student with a hidden agenda who is one of the members of Sara’s high rolling clique, she gets into the drug twelve which leads to an addiction, talking teddy bears, and a desperate move for more twelve.

“Nice way to lay die, she thought. This will be famous and make an unbelievable story once school starts again. People will be sorry they weren’t here.”