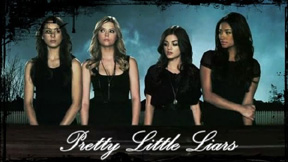 “Only two can keep a secret if one of them is dead.” And as the liars uncovered more secrets upon the return of Pretty Little Liars Jan. 2, you can only imagine whose funeral they will be visiting next.

Over My Dead Body, the midseason finale, left viewers on the edge of their seats begging for more. The episode began with the liars awaiting their fate in a police interrogation room, sporting fancy dresses doused in dirt.

Then the audience is shown flashbacks from the past 12 hours before landing themselves in the police station. Within these flashbacks “A” becomes the ultimate frenemy. She leaves Aria, Spencer, and Hanna dolls that give them orders they need to fulfill in order to save Dr. Sullivan (who was kidnapped by “A” because the liars told Dr. Sullivan about “A”).

These orders are those Spencer, Aria, and Hanna want to do but do not have the guts to do because they will all lose something they love. When the girls follow the orders from the dolls, Emily’s doll appears and leads her to an abandoned barn where the rest of the liars find her passed out later. Then they begin to dig for Dr. Sullivan with a shovel that turns out to be Allison’s murder weapon. The season ends with the girls sitting in the interrogation room while Jenna and Garret bask in the glory of the liars’ defeat.

The season resumes leaving viewers with even more drama and secrets. Aria and Ezra expose their relationship to Aria’s parents, and their reaction is bad as they ban her from seeing him again. Ezra even decides that he and Aria should break-up, leaving her heartbroken, but with a family friend returning to town she appears to have new prospects.

In the normal Pretty Little Liars fashion, the new episodes leave viewers confused as Emily seems to be at war with Spencer, Aria, and Hanna.  Soon, we learn that the feud is fake and just a ploy to make “A” believe Emily has evidence against “A” that the others do not want to show.

So Emily sets up to meet “A” with Spencer, Hanna, and Aria supposedly on their way to  help Emily out. Yet they hit a snag as Emily is meeting “A” the others show up late, leaving Emily alone with “A.” Hanna ends up hitting “A” with her car and the girls discover “A’s” dropped cell phone.

The liars head to Caleb to decode the phone, while doing this the phone is shut down and he only has the little data he already downloaded to decode. In the phone they find a picture of the four dolls sitting against a wall.

Hanna plans to throw Caleb a surprise birthday party at Spencer’s lake house with the help of Lucas who is acting a bit fishy. As  Spencer and Hanna and Lucas are setting up for the party, Spencer uncovers the wall in the picture from “A’s” phone is the wall in her lake houses attic. Implying that “A” or their helper has been there.

The girls soon discover Lucas’ weird behavior when Spencer and Emily are doing community service at a crisis help line and he calls in. Soon they suspect that Lucas is “A’s” helper. Hanna refuses to believe this though until she is out on the lake with him and he is getting nervous and jumpy, which results in her freaking  out and them both getting knocked out of the boat.

What is even weirder is Mona and Noel appear up later completely soaked, after Hanna finally resurfaces and Lucas doesn’t.

The episode creepily ends without Lucas resurfacing and “A” grabbing his shoe out of the water. In the next episode we learn that Lucas was in fact not “A’s” helper, but he was afraid to tell Caleb he spent his savings. So Lucas comes back admits to his wrong doings, and explain while he’s been gone he was going around selling his comic books to pay Caleb back.

So what surprising twists will happen on the next episode? Tune into ABC Family Mondays at 8 P.M. to find out.