All Time Low does some Dirty Work 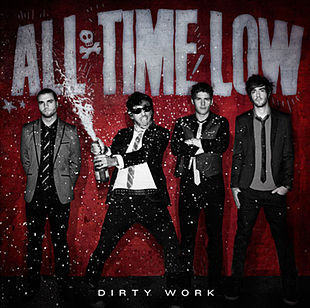 Alex Gaskarth of All Time Low (ATL) recently told an interviewer that the band has written a lot of songs about “good times”; however, he added that because of these “good times” everything else in their lives was burning down. All of this defined what the band had been doing for the past two years. “It was dirty work,” he says. This inspiration led to their newest album Dirty Work, which was released June 7.

Dirty Work is the band’s fifth studio album, and is available in both the regular, 13-song edition, and the deluxe edition with three bonus tracks.

The album’s first single “I Feel Like Dancin'” was released April 5, 2011, and was eagerly accepted by ATL fans. And how could you not be eager to blast this song from your headphones? With its up-beat tempo and party lyrics that enforce what the title implies, like “I feel like dancing tonight/I’m gonna party like it’s my civil right, (Everybody get kinda awesome).” Plus they even throw in a Ke$ha reference: “Everybody gettin’ kinda crunk/I think some dude just grabbed my junk (Whoa)/Now I know how Ke$ha must be feelin’!”

The song “Forget About It” is up-beat and focuses on a love-hate relationship. This is perfectly personified when the phrase “You know, there are some days when I really feel like this could work/Like, you and I are finally gonna get it right./Then there are days like today/when you make me want to tear my f—— hair out,” is said.

“Time-bomb” tells about two people falling in love knowing they “were destined to explode,” and wondering when their time will be because they don’t want to lose their love. “Just the Way I’m Not” blasts through the speakers and tells a story about loving a girl just the way she is.

A slow melodic tune starts the song “Return the Favor,” but as the tempo picks up you become captivated by the lyrics. “I’ve given it all to you./ I wish you would return the favor,” rolls off Gaskarth’s tounge in the chorus and the meaning of the song is revealed.

“She has no idea (No idea)/That I’m even here (That I’m even here),” fills the chorus of “No Idea.”  The song is about someone who is secretly in love with someone who doesn’t know. Yet they are incapable of leaving because, as it says, “you take my breath away.” “That Girl” centers around a girl who’s “so damn cold, like twenty below?/That girl, that girl, she’s such a b—-,” and a boy who’s “in love with it.”

“I’ll misbehave if it turns you on/No Mr. Right if you want Mr. Wrong,” describes the whole, “good guys finish last” belief displayed in “Bad Enough for You.” “Guts” discusses “what it feels like finding out that I’ve got the guts to say anything.”

“Not gonna miss you when you’re dead and gone/You’re not a hero, you’re a liar/You’re not a savior, you’re a vampire/You’re just a train wreck, not a winner/A saint without a cause,” are lines that ring through the stereo as “Heroes” plays. It’s all about someone who everyone hates for messing things up.

Other songs on the regular album include “Do You Want Me (Dead?),” “Under a Paper Moon,” and “A Daydream Away.” Bonus tracks on the deluxe edition include “Merry Christmas Kiss My A–,” “My Only One,” and “Get Down On Your Knees and Tell Me You Love Me.”