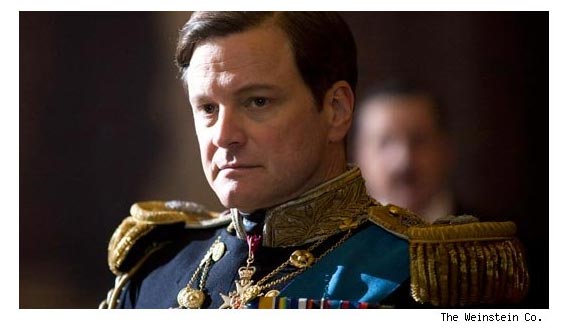 T-t-t-the King’s s-s-speech is a m-m-movie that not many of you are most likely familiar with. It doesn’t have all the gritty violence or explicit sex scenes that make most of today’s hit movies just so popular. It wasn’t directed by Michael Bay, so there weren’t copious amounts of unnecessary explosions like Transformers, and it didn’t bring you down to the wire trying to guess what would happen in the end like a Christopher Nolan film. What it does do, however, is deliver an extremely well directed and astonishingly brilliant character driven film that turns into one of if not the best picture of the year.

The film is based off of King George VI and his famous stammering. It follows his journey through learning to speak publicly and do so in a manner that would instill confidence in his people at the outset of World War II. Colin Firth as King George delivers a stunning performance that rightfully netted him his first Oscar for Best Actor in a Leading Role. His perfect delivery of the anguish his character feels at being unable to speak publicly and being forced into the role of king draws you into the movie and makes you feel for the hesitant king.

He is followed by an equally impressive performance by Geoffrey Rush as Lionel Logue who would be the man most instrumental in helping the King achieve the ability to speak coherently in public. His performance is spot on and extremely worthy of the Oscar he was nominated for. His presence on the screen and his stunning portrayal of the character truly played off of Colin Firth’s excellence to create a perfect blend of pure awesome cinematography.

The entire cast however was equally as excellent in their respective roles. Helena Bonham Carter delivered a strong performance as the wife of King George which was most definitely on par with Derek Jacobi’s role as Archbishop Cosmo Lang and Michael Gambon’s brief cameo as King George the V.

The King’s Speech was excellent. It’s not a movie that follows a complicated plot, but it’s a movie that will most likely go down in history as a textbook example of how a character driven movie should be produced and cast. The acting is perhaps some of the best I’ve ever seen in a film, and I will happily buy this movie when it makes its debut on DVD. If given the chance to see it, I would most definitely suggest you check it out. I give it 5/5 on Ziggy’s Scale of Excellence.